Following Jerome Powell’s hawkish comments last Friday, the stock market seems to be free falling. We saw a clean rejection off the down trendline connecting the all-time high and the March 2022 top, this was immediately followed by a breakdown below a bullish price channel. Price is now rapidly approaching the third key level of support we’ve been watching at 3900 points. 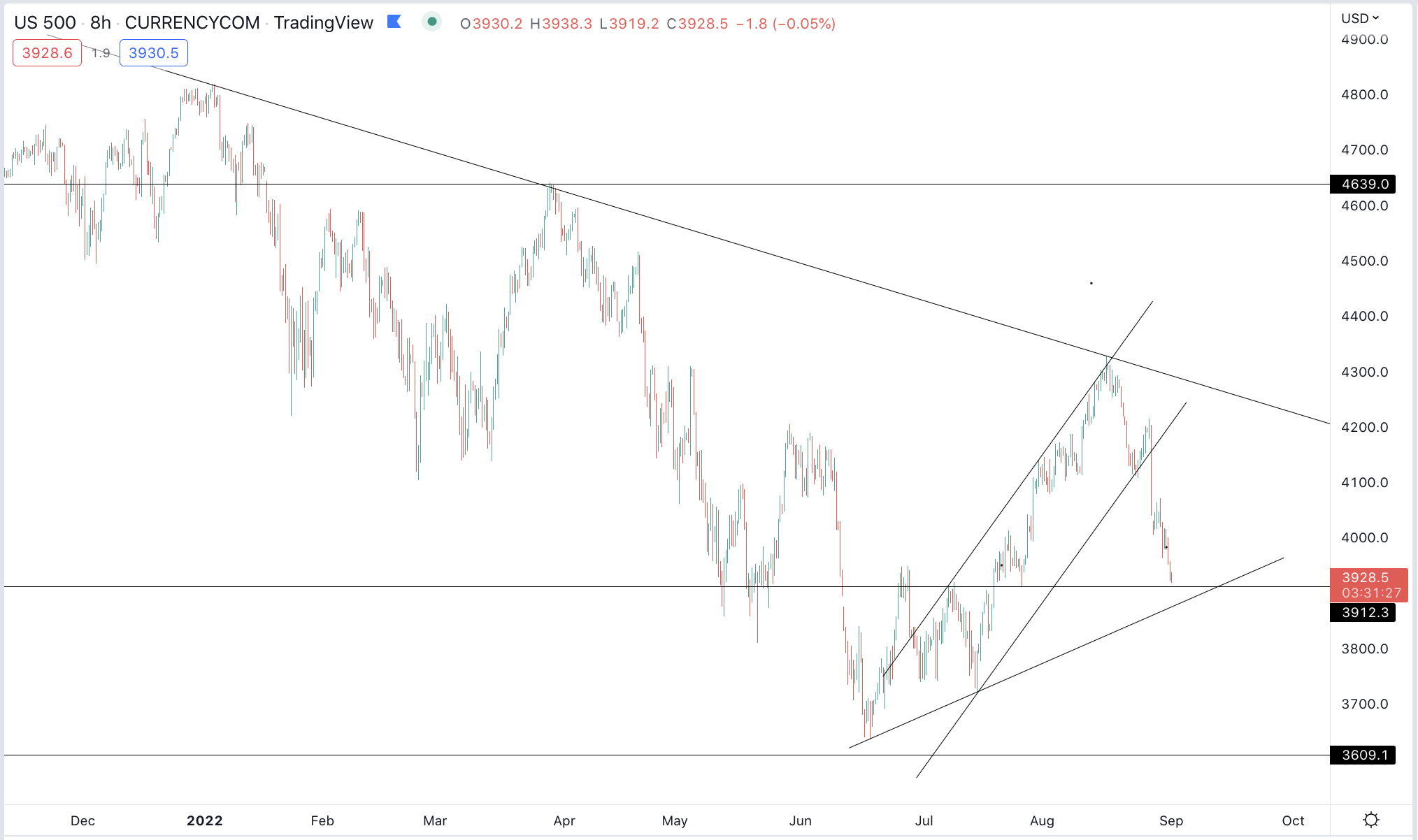 Our recent article “Optimism makes a comeback” discussed some key breadth thrust signals triggered during the summer rally. These signals have historically corresponded to short-term price appreciation on the SP500, and we used them to make the case that the 2022 June low would likely not be revisited. 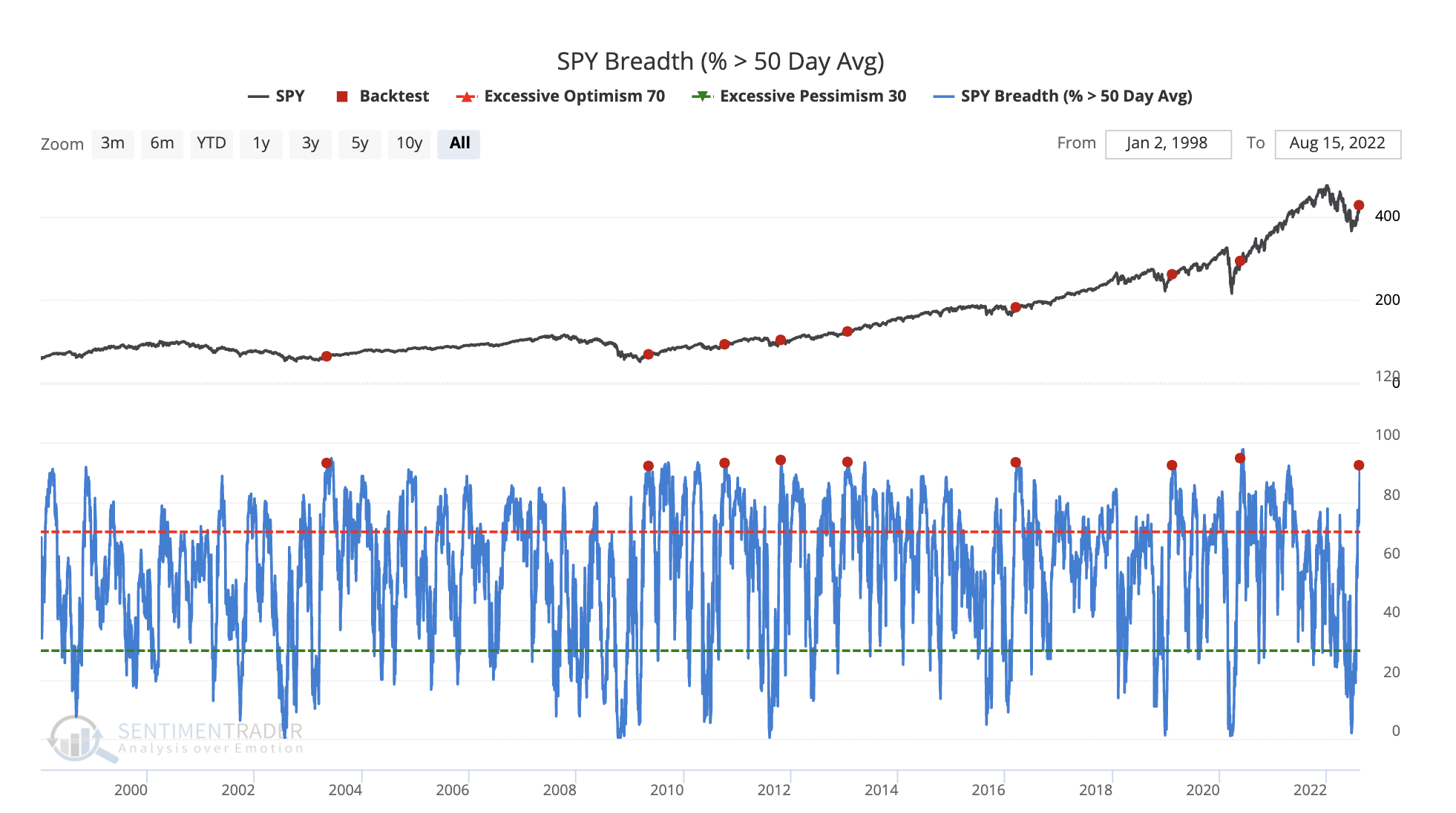 The question is, how do we know when this breadth thrust signal is invalidated and no longer looks comparable to the previous signals? This is the topic of today’s Youtube video, and we dive into a little bit more detail in this update. Over the next week, we’ll also be diving deep into the underlying fundamental driving factors of the market to see if we’ve seen major changes in the macroenvironment over the last few weeks that could invalidate the bullish case for stocks.

Is the Breadth Thrust Invalided? If so, How Bad Could it Get?

We can look at the breadth thrust readings that have occurred throughout the current secular bull run, which began in 2009, we believe these are good benchmarks to compare whether or not we are seeing comparable “secular bull run” behavior today.

From the date of the breadth thrust signal, we’ve seen an average maximum drawdown of 2.9%. 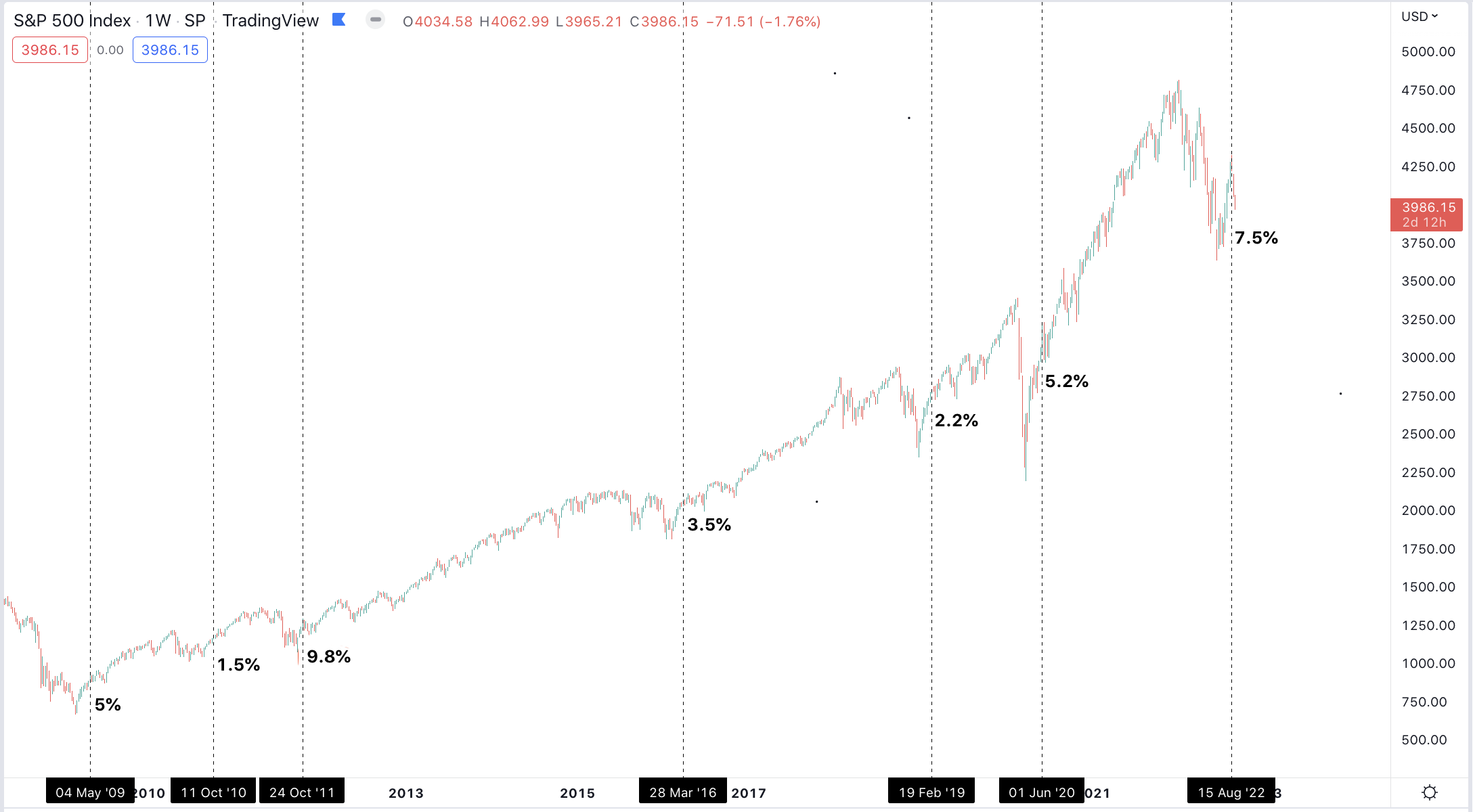 If we put these drawdown levels on today’s chart, it helps us visualize the results. The correction we’ve seen today has been much more painful than what typically happens following these breadth thrust signals. Seeing the market move down rapidly past these benchmarks can already be considered a yellow flag and decreases the odds that the breadth thrust signal plays out.

The last comparable drawdown to today is 2011 when the market rapidly dropped 9.8% following the breadth thrust signal. A correction of this magnitude would take the market down to 3885 points (which is just a hair below where the market is currently sitting). 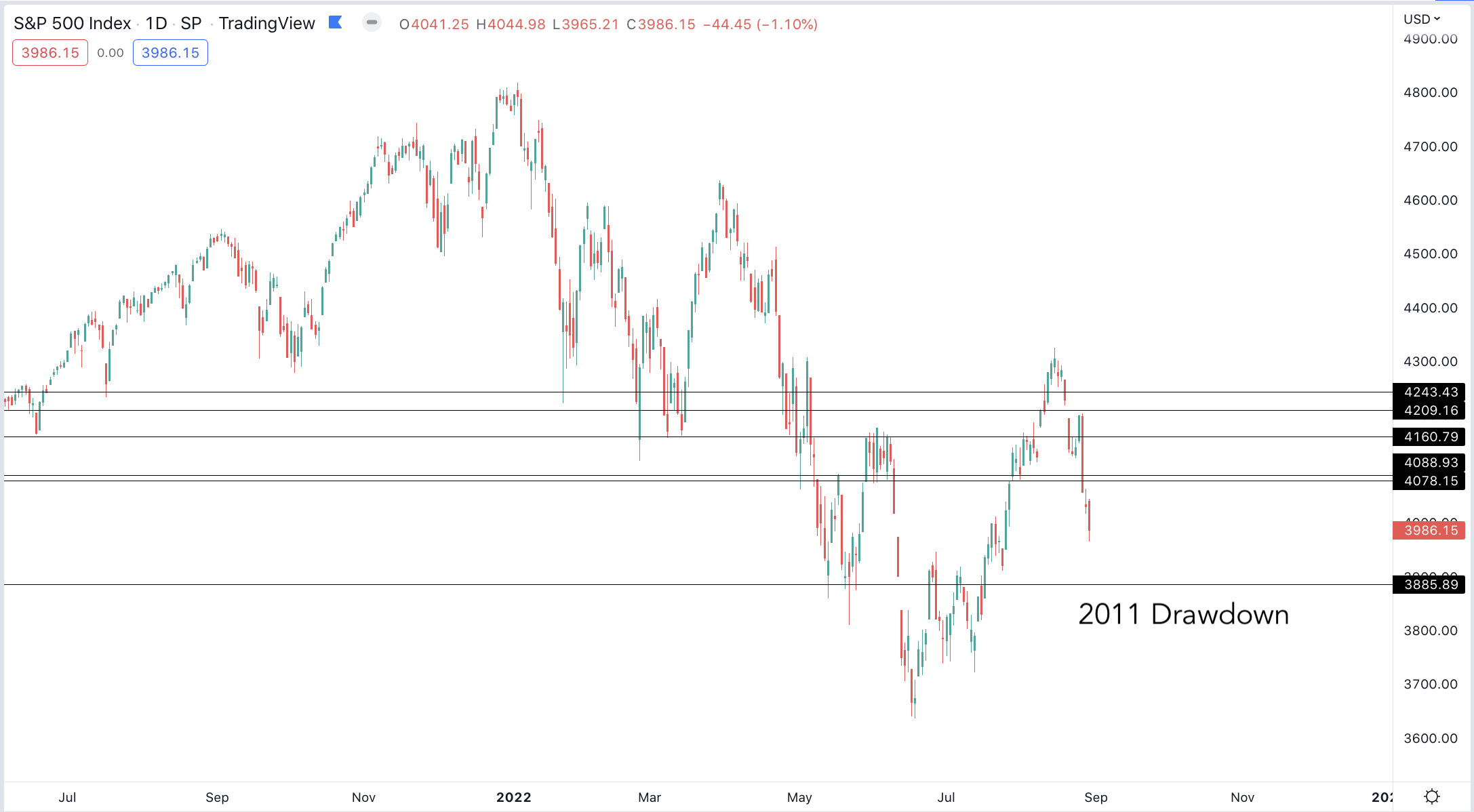 If we take a closer look at the 2011 reading, we can observe that the market found support at the 61.8% Fibonacci retracement level from the rally. 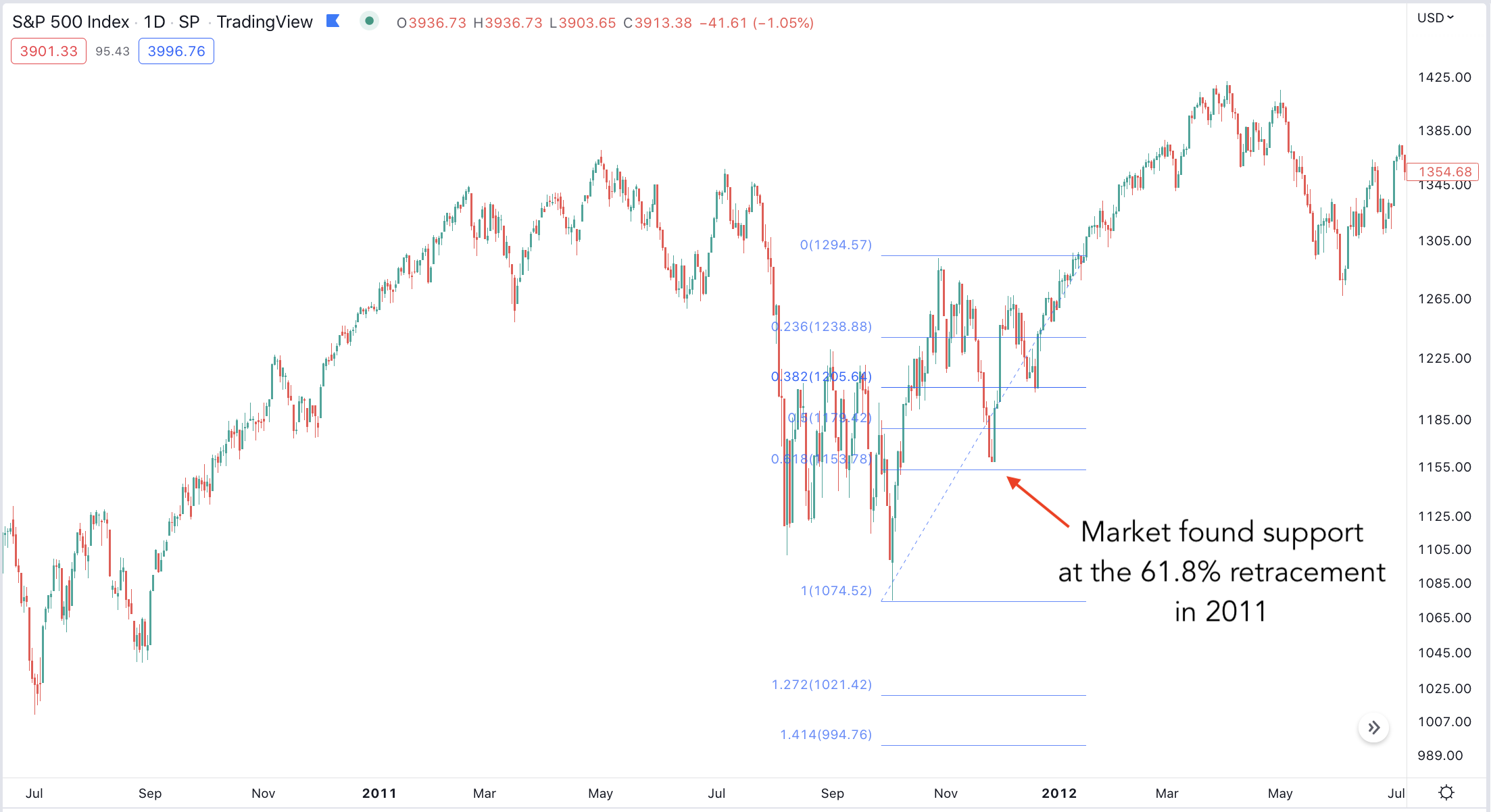 Today, the 61.8% retracement level also happens to coincide with the 3900 points level on the SP500. Fibonacci retracements can also be used to interpret trend behavior. A correction that goes past its 61.8% retracement level can no longer be considered just a “counter-trend correction”, seeing price drop below 3900 points would very much be an invalidation of the bullish technical structures we’ve seen develop over the last few months. 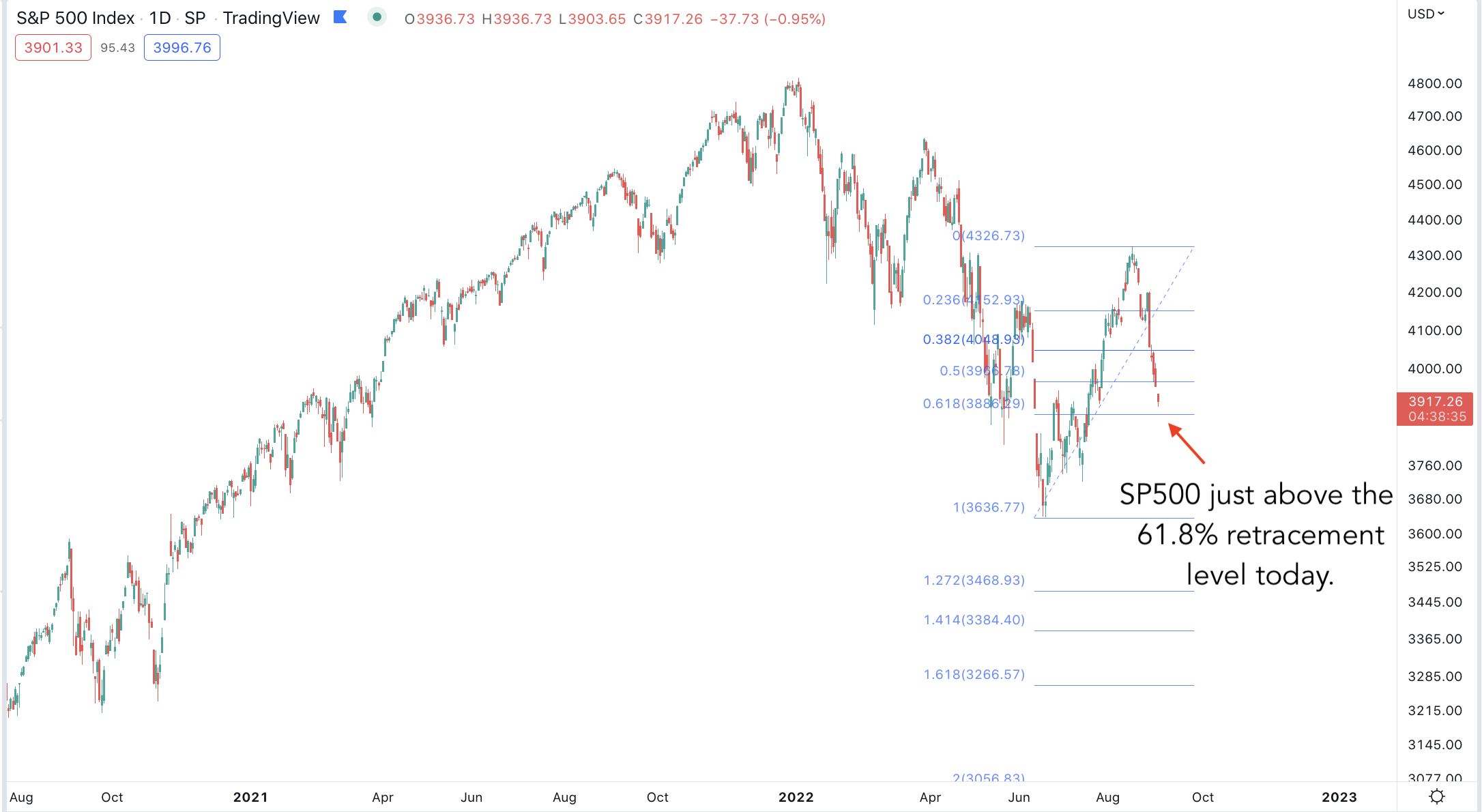 While seeing price breakdown below 3900 points would not invalidate the fundamental macro picture we’ve been discussing over the last few months, it would decrease the odds of seeing significant short-term upside (which the breadth thrusts suggested we should expect) and increase the odds that the macro bullish case is being delayed and not playing out imminently. Macro shifts can take multiple months before materializing, and we’ve not seen recent data or developments invalidate the fundamental case we’ve been building.

Considering the technical significance of the 3900 points support zone, we’ll be watching the price action carefully over the next few trading sessions to see if it acts as support. If that is the case, it would suggest that the stock market is waiting for the next inflation readings before picking a direction. We expect the CPI reading should surprise to the downside but making such predictions can prove to be incredibly difficult. Dip-buyers who are constructive on the market can consider this a favorable risk/reward opportunity to take advantage of the next leg higher. Short-term traders can see this as an objective long entry placing a stop loss below the technical support levels highlighted on the chart below.

If the market were to slice through the 3900 points level in the coming days, it would suggest the market is not quite yet ready to begin trending up in a consistent manner. It would lean more in favor of a lengthier bottoming process with an undercut of the June low. 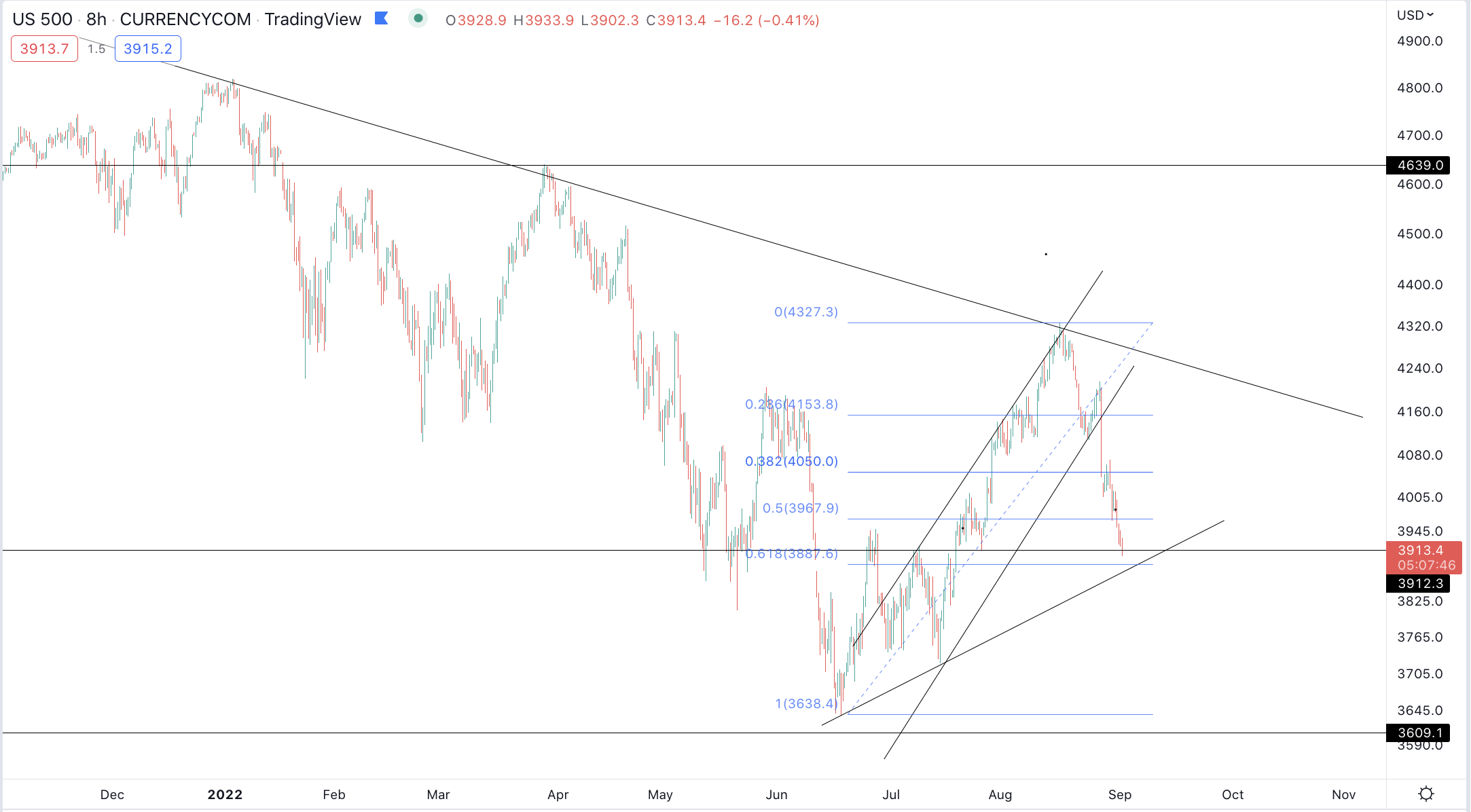 Finally, XLU/SPX is coming closer to testing the top of its secular bearish price channel. XLU/SPX is typically seen as a defensive sector (ie: it outperforms the market when the SP500 is going down). Over the last 10 years, we’ve seen the top of the price channel act as a tough area of resistance for the defensive sector, coinciding with bottoms in the SP500. If history were to repeat again, and the ratio was to reverse off the price channel resistance, it would suggest there is a bit more pain ahead in the broad market as the ratio rises to encounter the resistance line. It would also suggest we are nearing the end of the correction. Of course, that is just one small piece of the puzzle, in the next SP500 update, we’ll be diving into earnings, a big narrative amongst market participants is that we should expect earnings to be collapsing in the next couple of quarters which would take the SP500 down significantly from current levels (in a similar fashion to what we saw in 2008). We’ll be taking an in-depth look at whether or not we should expect that to play out. 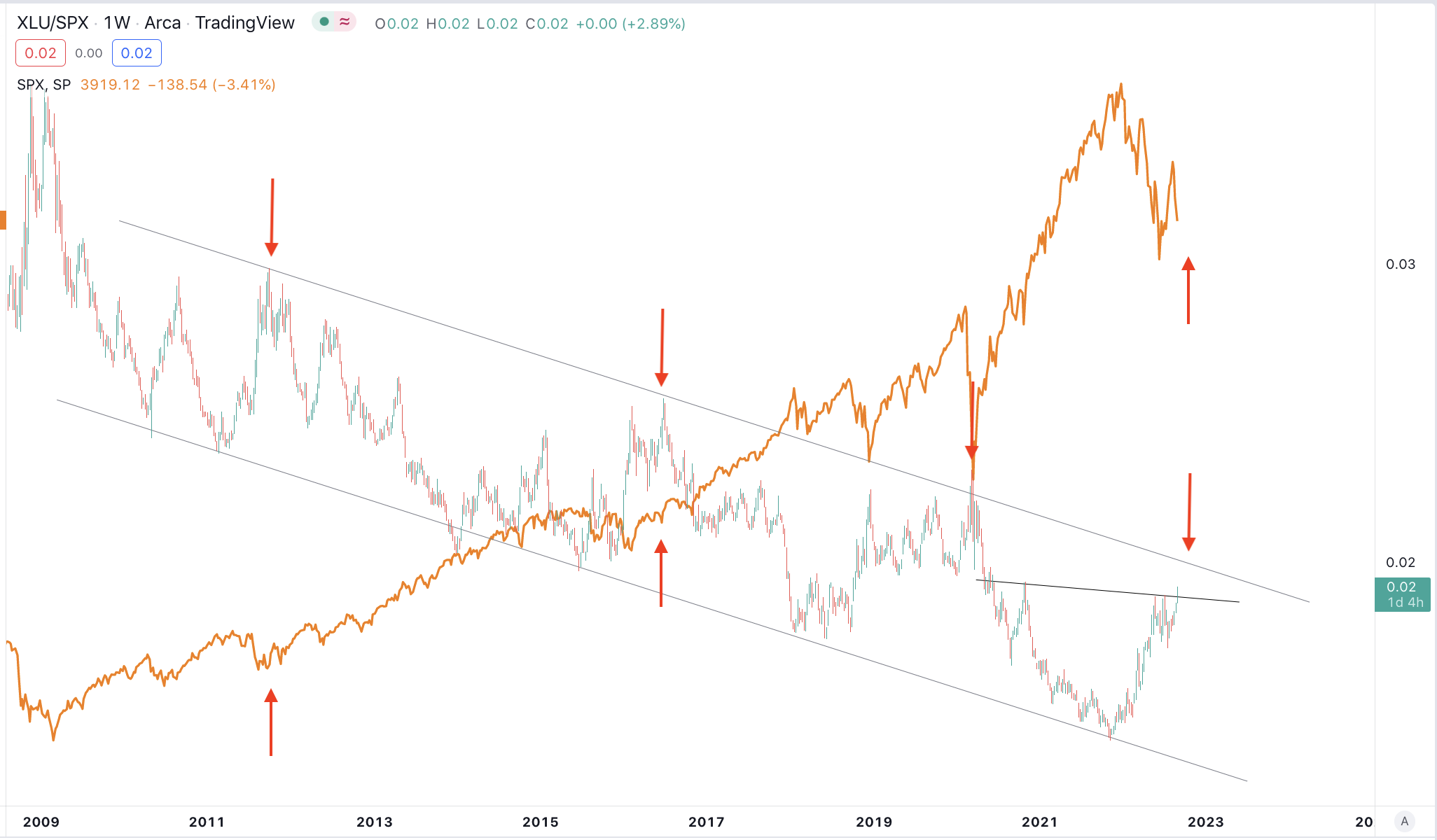