After the Fed brought pain to stocks in the first few months of the year, investors drew a line in the sand in mid-June. They suspected the Fed would soon take its foot off the gas. Oil prices and interest rates were at very high levels, hinting of a potential recession. Investors were so worried about the Fed that bad news were seen as good news. Many thought the Fed would have to reverse course if the economy slumped.

By then, the S&P 500 had dropped more than 20%. Many saw that as an opportunity to buy great companies on the cheap. There was a lot of speculation about what the Fed would do next, and people feared missing out. The risk-reward ratio looked very good, so it made sense to be hopeful.

By the middle of August, two months later, stocks had seen a massive move from their lows, while oil prices had fallen quickly. It was clear that falling oil prices was good for stocks. There were signs that inflation was slowing down, so it wasn’t too far off to think that the Fed would ease.

But on August 26, when central bankers met in Jackson Hole for their annual meeting, everything changed. In his long-awaited speech, Fed Chair Powell surprised the market by saying that efforts to fight inflation would cause “some pain” to the economy. Since then, both oil prices and stock prices have gone down. What went wrong? 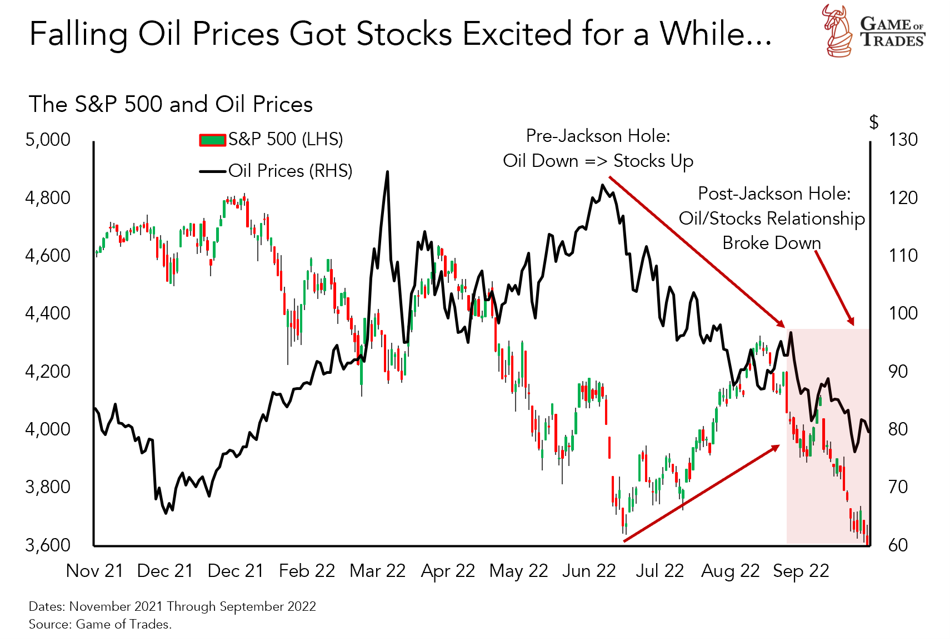 While people were getting excited about the stock market before Jackson Hole, something worrisome was happening in the bond market. The 2-year Treasury yield, a good indicator of Fed monetary policy, was about to re-test the highs from mid-June. How was that possible? After all, oil prices were falling. That was also true for other commodities like copper. Futures for wheat and corn, tied to the price of food, were also falling quickly. Lumber, a big part of the cost of building a house, peaked in March. Wouldn’t all of these factors bring prices down? The bond market was definitely behind the curve, many thought. Only in hindsight can we say that what was going on should have been a red flag for equity investors. 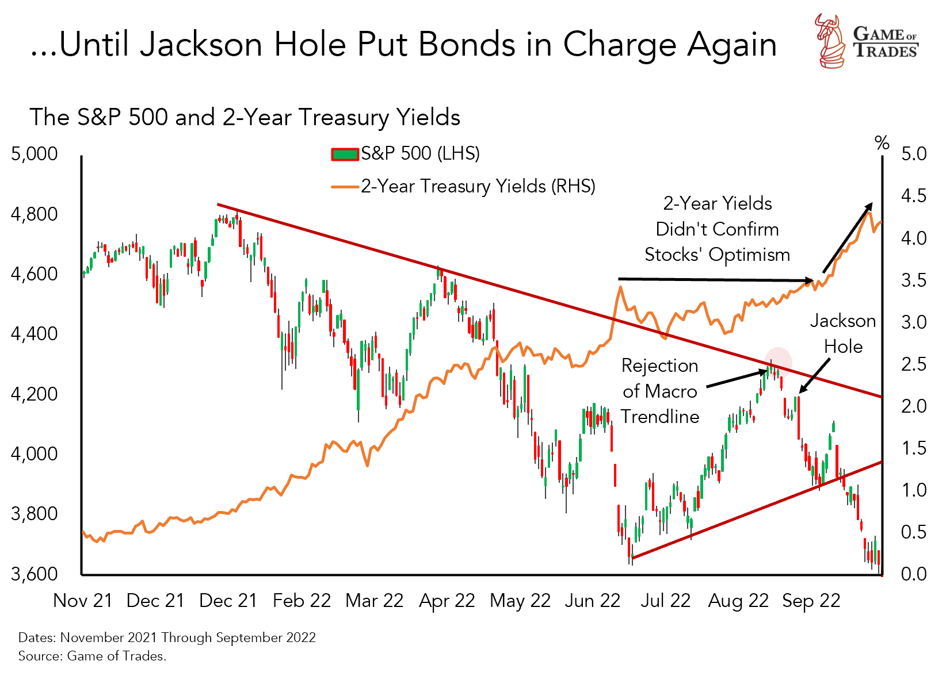 At Jackson Hole, the Fed’s tone came out very different from the “soft landing” story it had been telling. The stock market quickly figured out what was happening: the Fed hadn’t turned yet. Bond yields went up as investors re-priced the Fed’s more aggressive stance. That surprised the stock market, which sold off quickly. The market priced in much higher volatility for bonds, that’s now at the same level as when the global pandemic started. Traders are finding it very difficult to predict what the Fed will do. 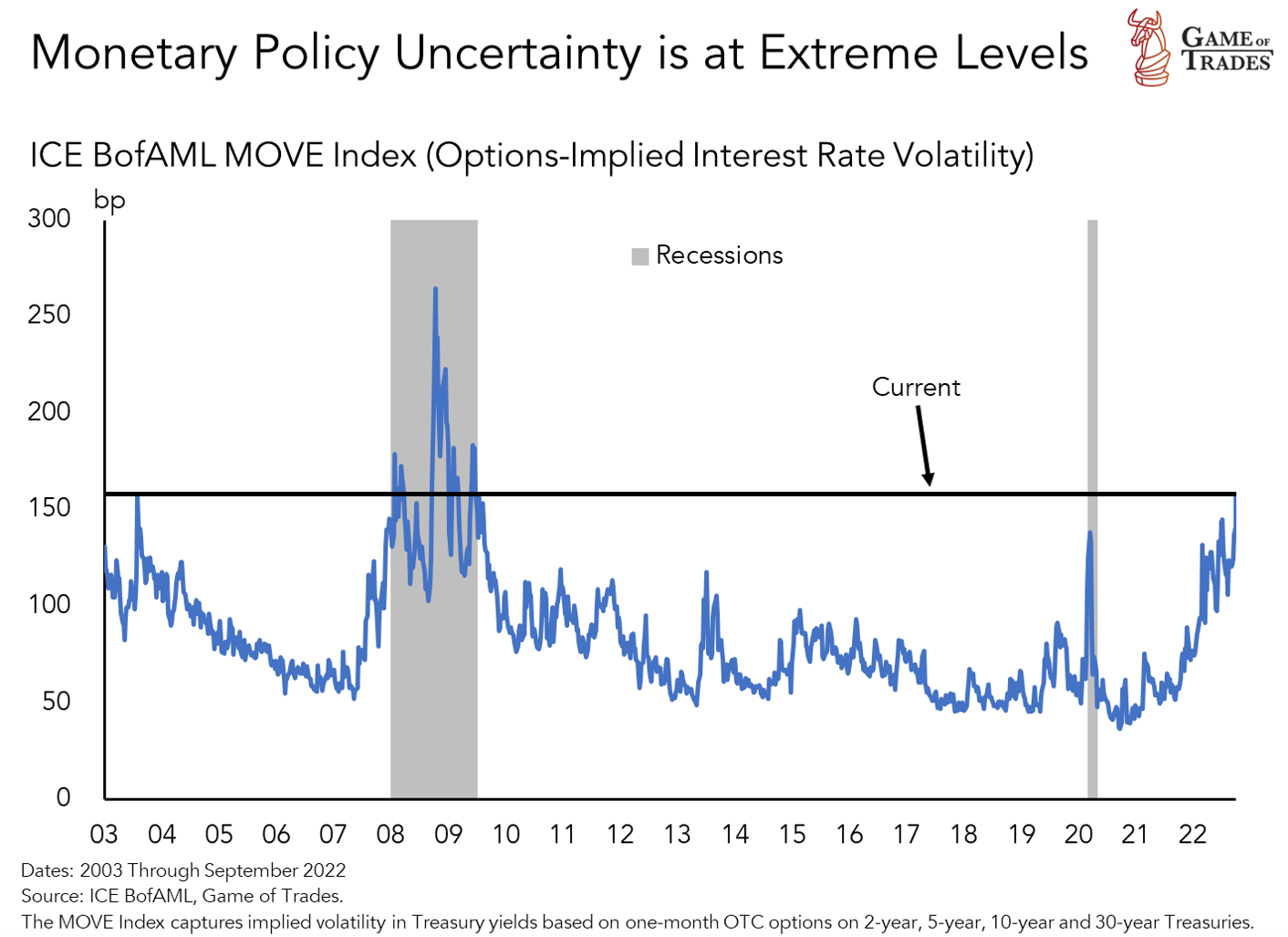 That’s where we stand today. But where are we headed? Timing the Fed is hard. Should we park our money on 4% T-Bills and call it a day? We don’t think that’s the right thing to do for two reasons. First, there are signs that show inflation is about to slow down. And second, Wall Street is too pessimistic on earnings. We expect good news on these two fronts in the next few months, which is good for stocks.

It is well known that inflation is almost impossible to predict. The Fed’s academics and Wall Street’s PhDs have never gotten it right. Still, it’s important to note that gas prices have been a great way to predict where inflation is going. The historical data is very clear on that.

In the last 50 years, when gas prices went up the most, inflation also rose the most. Gas prices seem to have peaked in June, but the Fed is still at war, which is troubling. The Fed is acting tough despite clear signs that monetary policy is already tight enough.

We have to remember that the Fed is trying to restore its credibility after letting inflation run too high after the pandemic. We must look past the Fed’s harsh words and think about what will come next. We believe that our work on inflation keeps us one step ahead of the game. Let’s take a quick look at that. 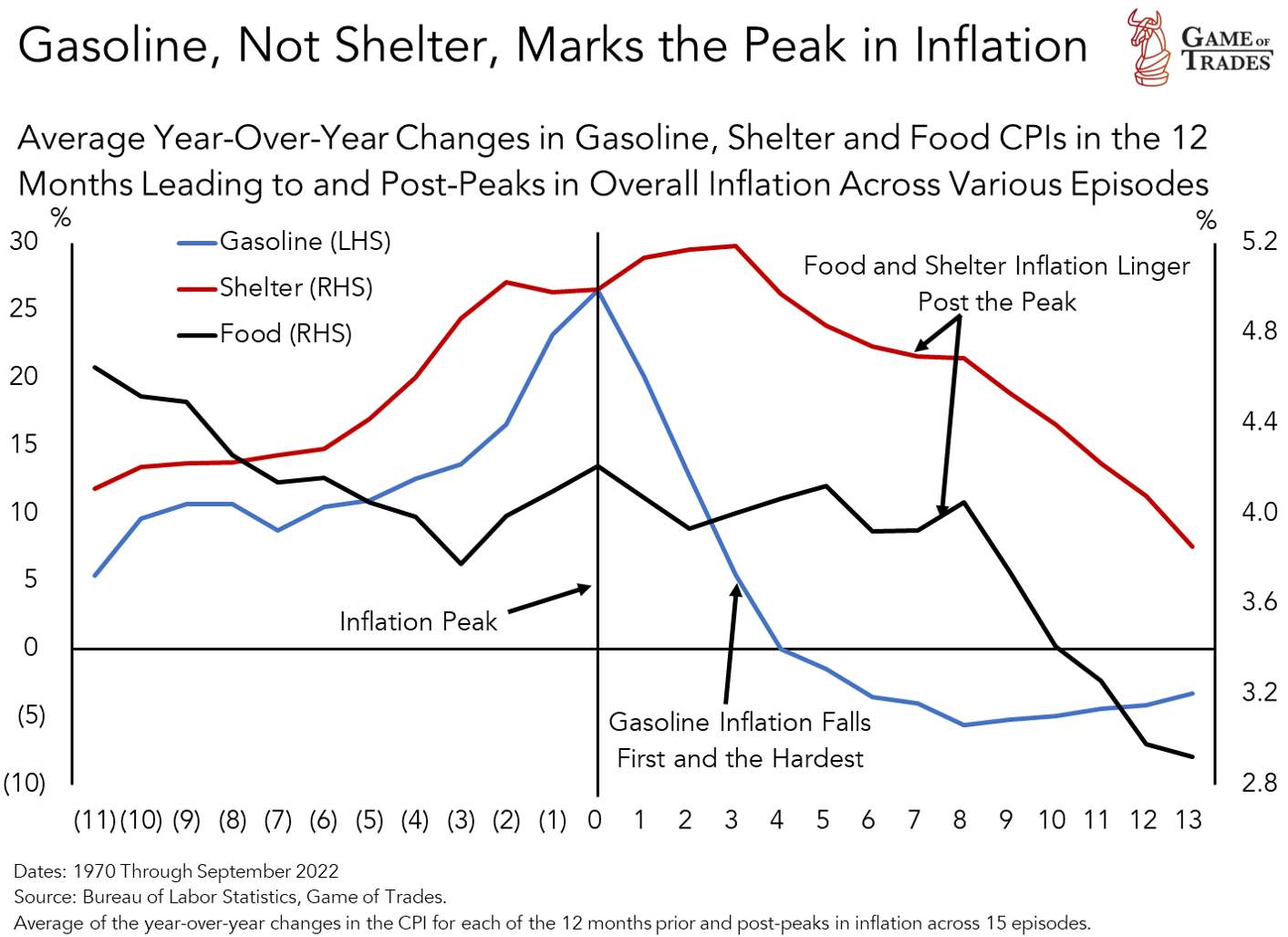 One of the biggest worries is that rents are going up too fast, which is a big part of what’s driving inflation today. The concern is that inflation will become sticky and very hard to get rid off. But how big of a worry is this really? After all, gas prices are going down no?

As we saw in the last chart, housing inflation peaks a few months after the overall inflation rate, so there’s a lag that we need to deal with. So even though gas prices have gone down a lot since June, that doesn’t mean housing costs should have gone down a lot too. That has to do with how housing inflation is calculated by the government. It includes the rents that households pay monthly but not the market rents that people pay when they sign new leases. And those have been coming down lately. It won’t be long before that shows up in the housing inflation numbers. And yes, the Fed is aware of this, but you wont’ hear them getting too excited about it. We think housing inflation will peak in Q1 of next year, and stocks will anticipate that. 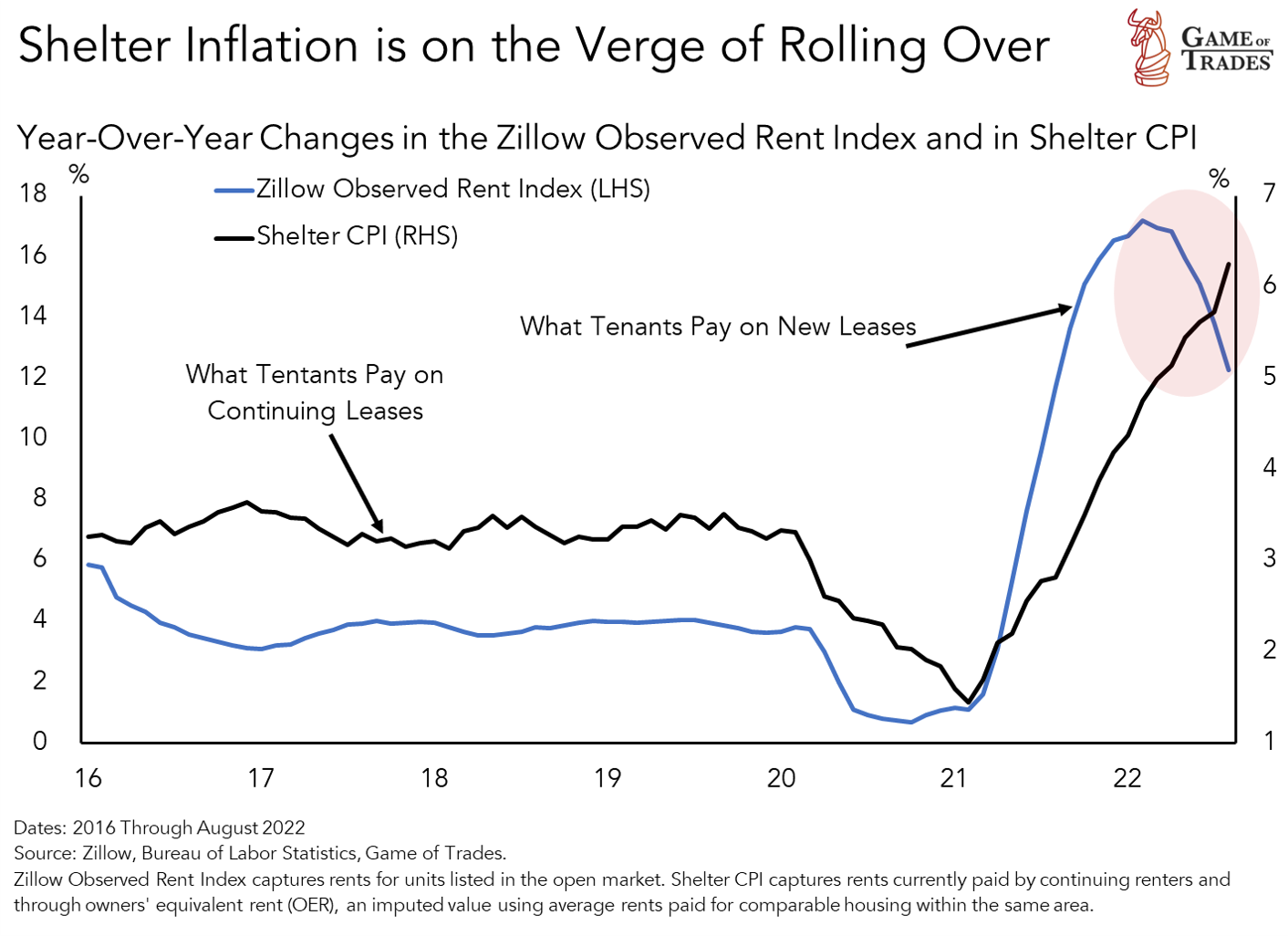 In the spring, the Fed was having trouble proving that it was serious about bringing down inflation. Both the bond market and consumer surveys confirmed it. So it made sense for the Fed to turn more aggressive in the following months. But it’s also fair to say that things today aren’t the same as they were in the 1970s. When Volcker was appointed Fed Chair in 1979, expectations about where inflation was headed were much higher than what we see today. Inflation was deeply entrenched, and that’s simply not the case today. 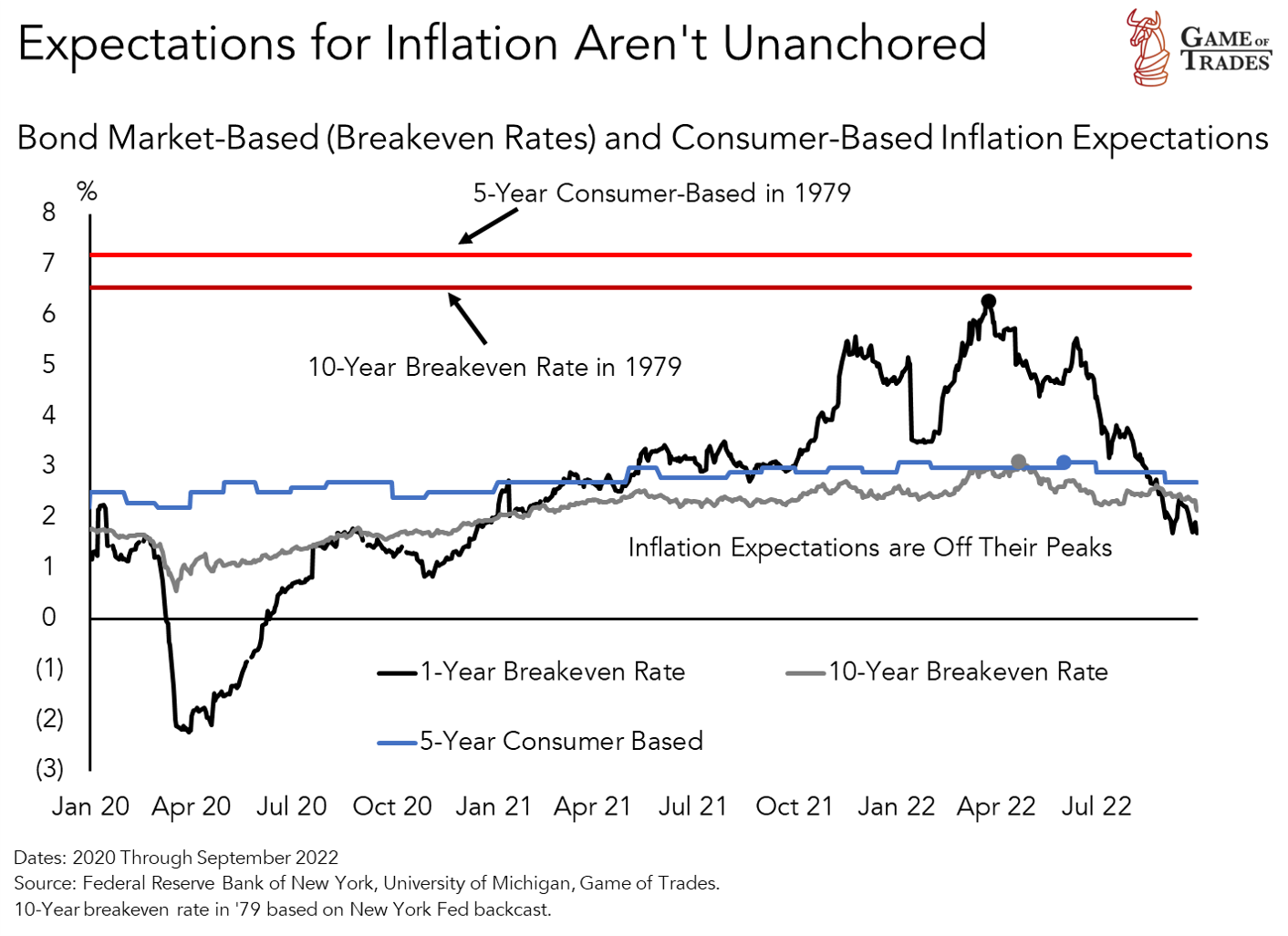 That makes for a much tougher case for the Fed to keep its aggressive stance. We think inflation will continue to fall as demand slows down and slow-moving factors like housing and food prices catch up with changes in gas prices, as has always been the case. That will be a positive for stocks. On average, since the early-1950s the S&P 500 rose more than 15% in the year after inflation peaked.

Inflation is about to go down, which is good news. But investors also need to think about other things that matter. That may be hard to imagine in a year like this when it’s all been about the Fed. But earnings are also a big driver of returns. One worry is that, since the beginning of August, Wall Street has been lowering its predictions for earnings over the next year. That sounds like a double-whammy for stocks. But we see this growing pessimism on earnings as an opportunity to take the other side. Over the last 25 years, most negative revisions to earnings failed to anticipate recessions. 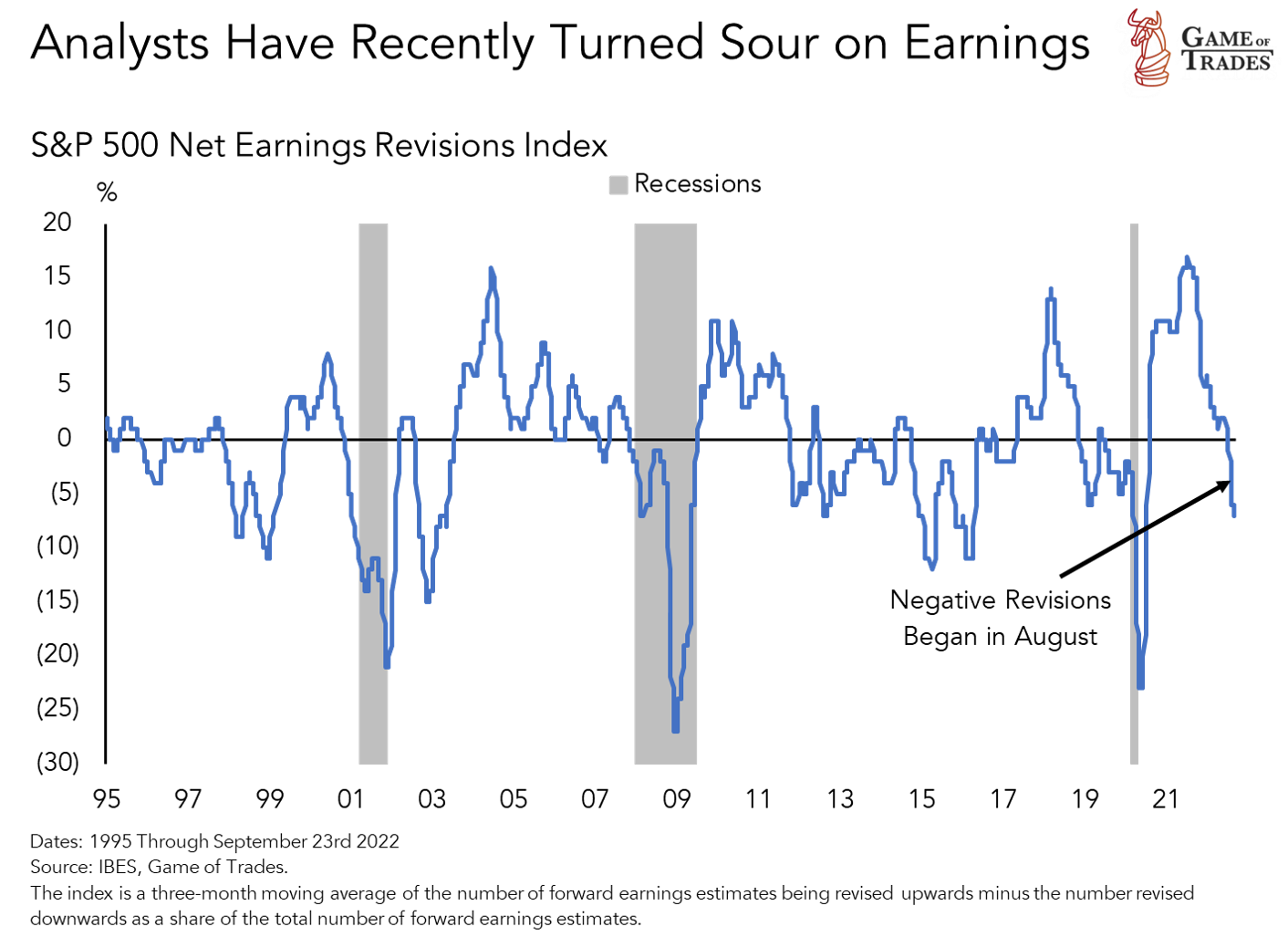 Why are we so optimistic on earnings when most analysts are turning bearish? Because we think the fiscal stimulus’ lingering effects will continue to support consumer spending over the next couple of years. As a result, we see plenty of runway for earnings growth. We’ve done the work: using our data-driven approach to look at history, we found 13 episodes since 1900 when earnings boomed like last year. What happened following the boom was quite telling. 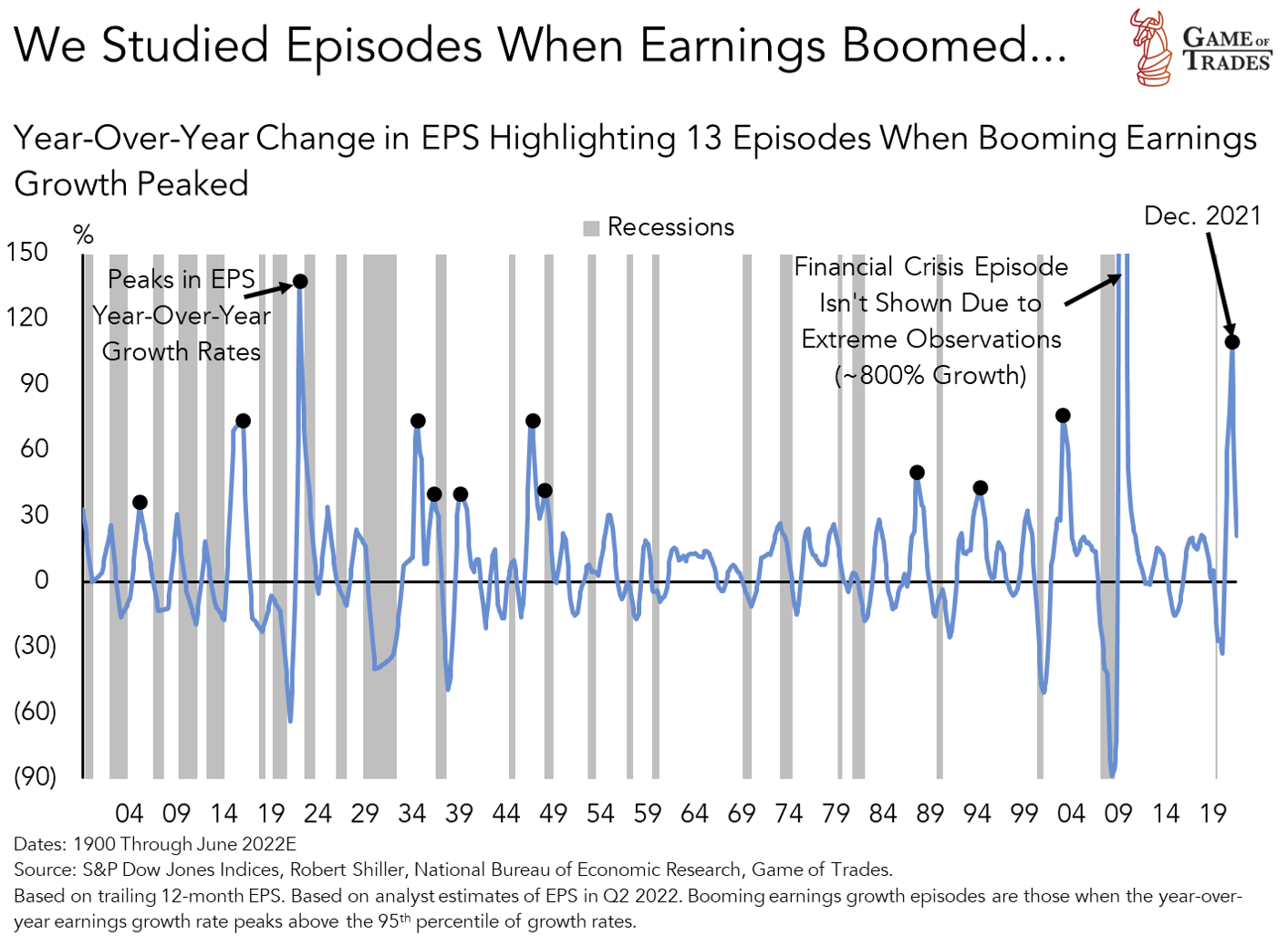 Following these episodes, earnings actually grow pretty steadily, except after World War I and 1937, when both monetary and fiscal stimulus were taken away too quickly in a weak economy and earnings crashed. That said, a coordinated withdrawal of stimulus isn’t evident in today’s environment. The bottom line is that Wall Street’s outlook for earnings growth over the next year or so looks too pessimistic compared to what the history suggests. That’s particularly true compared to the 1947 episode. Actually, we think that today’s environment looks similar to that of the post-World War II years. We’ll dig into that a bit. 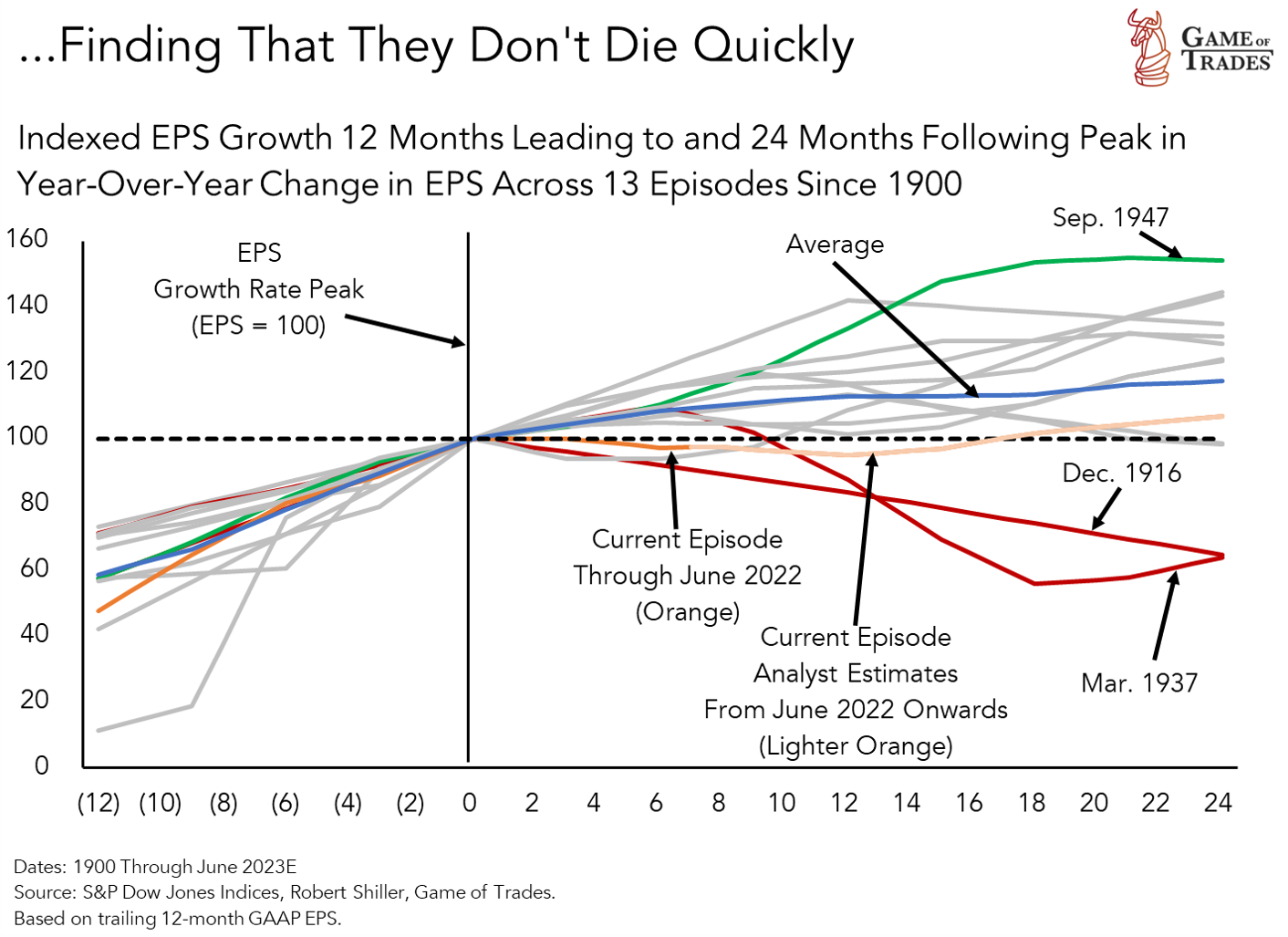 Consumers today are a lot like those in the years following World War II. Because they spent little during the war, they had a lot of extra cash in the years that followed, leading to big spending that drove booming earnings.

We’re seeing the same thing in the years after the pandemic. Because of the lockdowns, people didn’t spend much, saving around $2.5 trillion above normal. That’s about 16% of what people are expected to spend this year and next. This is why we think earnings will be better than expected and that analysts are being too pessimistic. 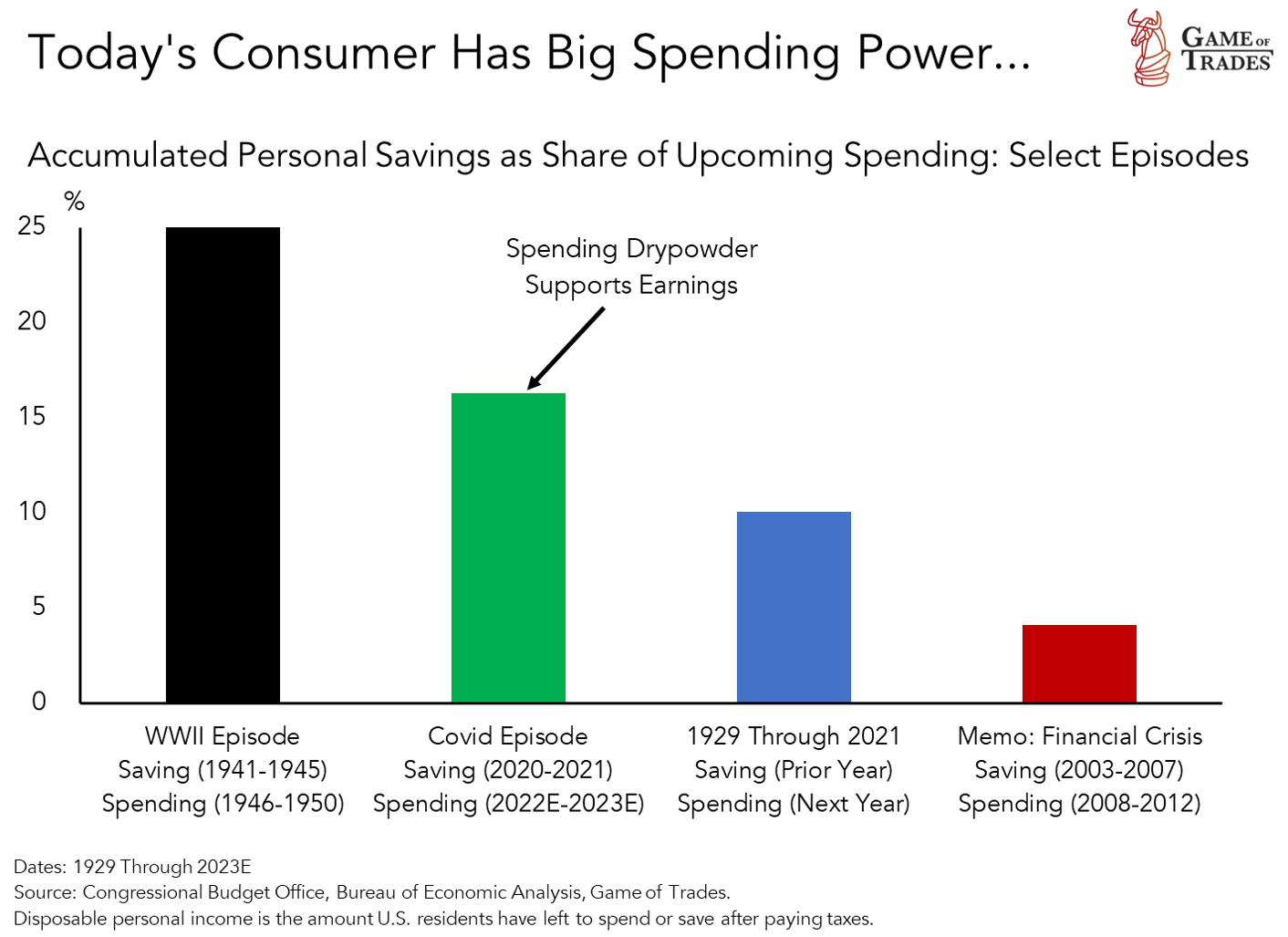 Does that mean that strong consumer spending could keep inflation high? We don’t believe that. It’s true that the huge rise in consumer spending after Covid caused nearly 60% of the inflation that followed. But spending has cooled down this year as the fiscal stimulus worn off. That should make inflation less of a problem in the next few months, giving the Fed more room to ease their stance. At the same time, consumer spending has fared much better this year than in 1973, even though gas prices have also gone up. All-in-all, we think spending can slow down enough to cool down inflation but not lead to a deep recession like in the mid-1970s. 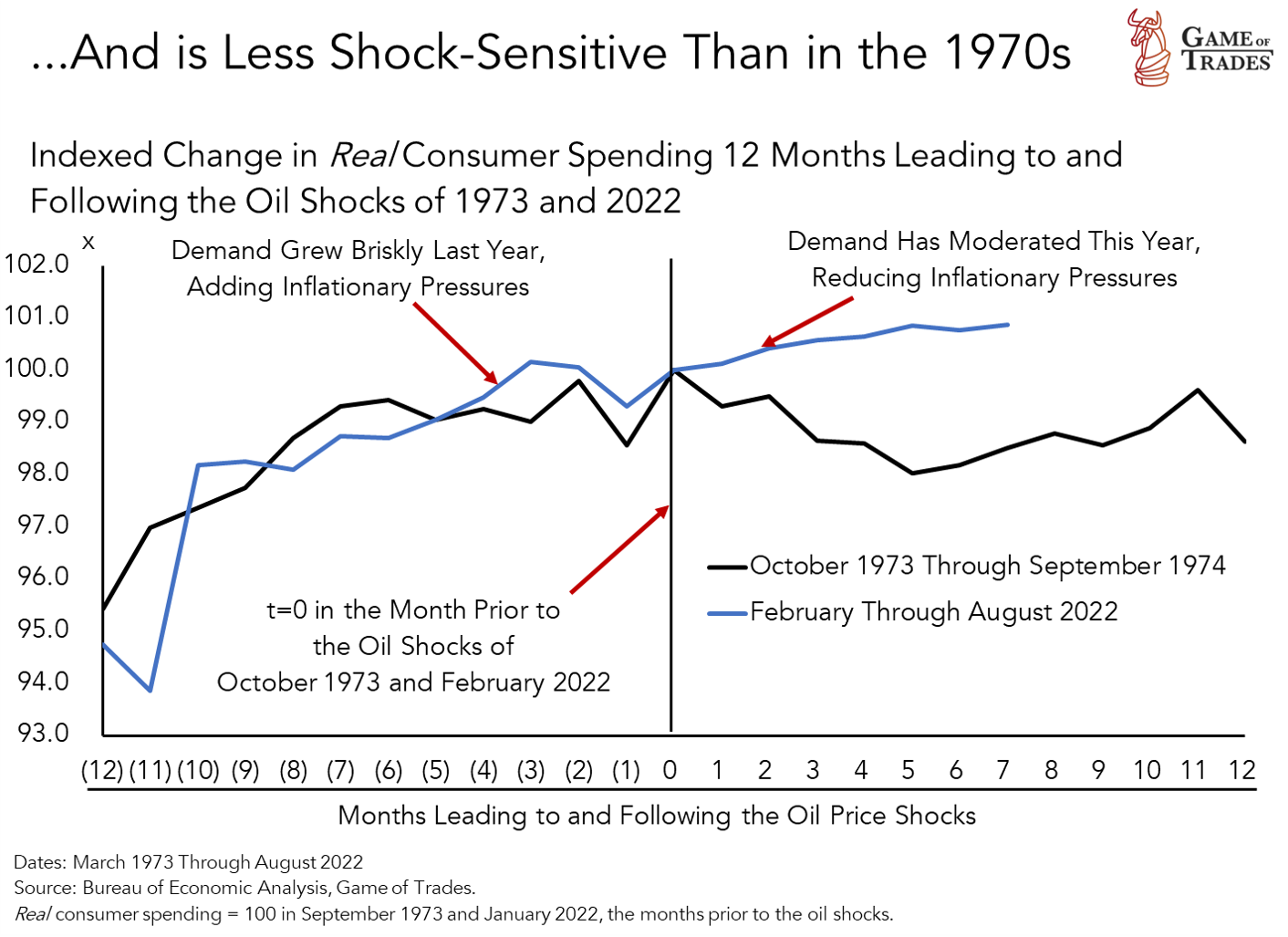 Conclusion: Staying Ahead of the Game

Technical analysis is one our core strengths, so we’ll conclude the newsletter highlighting some of the key setups we’re watching in today’s market. The S&P 500 is at an important crossroads: it’s testing the 200-week moving average. Over many decades that indicator proved a key level of support during secular bull markets. The selloff that we’ve seen this year has many investors worried that the bull run that started after the financial crisis is ending. 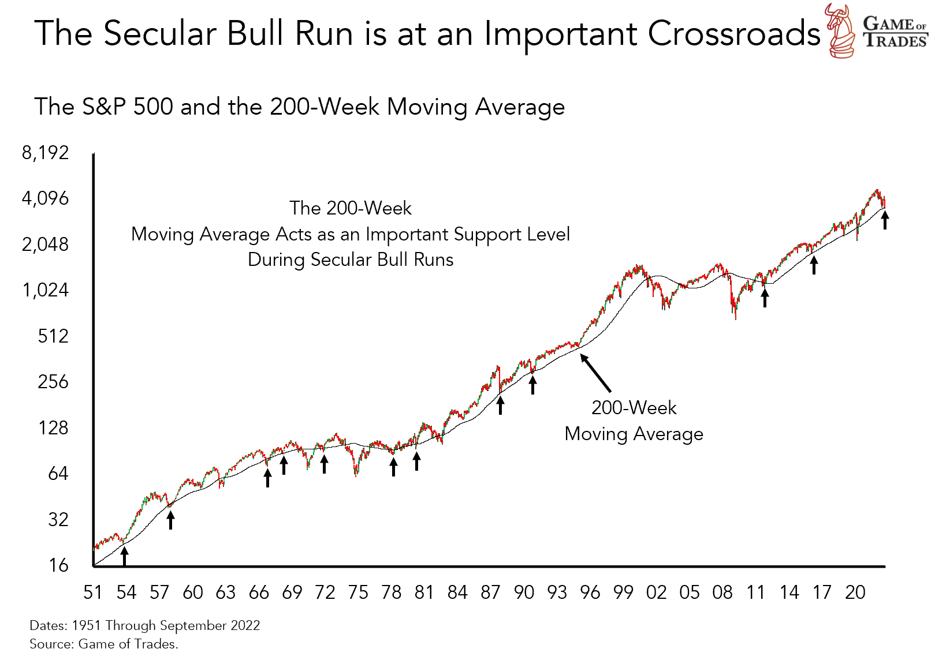 Another important technical development worth highlighting is the S&P 500’s divergence with the RSI. That divergence has historically marked market bottoms.

This speaks to the potential for the concerns tied to the Fed already being priced in. The divergence suggests that the negative influence from tight monetary policy on stocks is weakening. We’d need to see a new catalyst, like a contraction in earnings, to see this divergence fail. 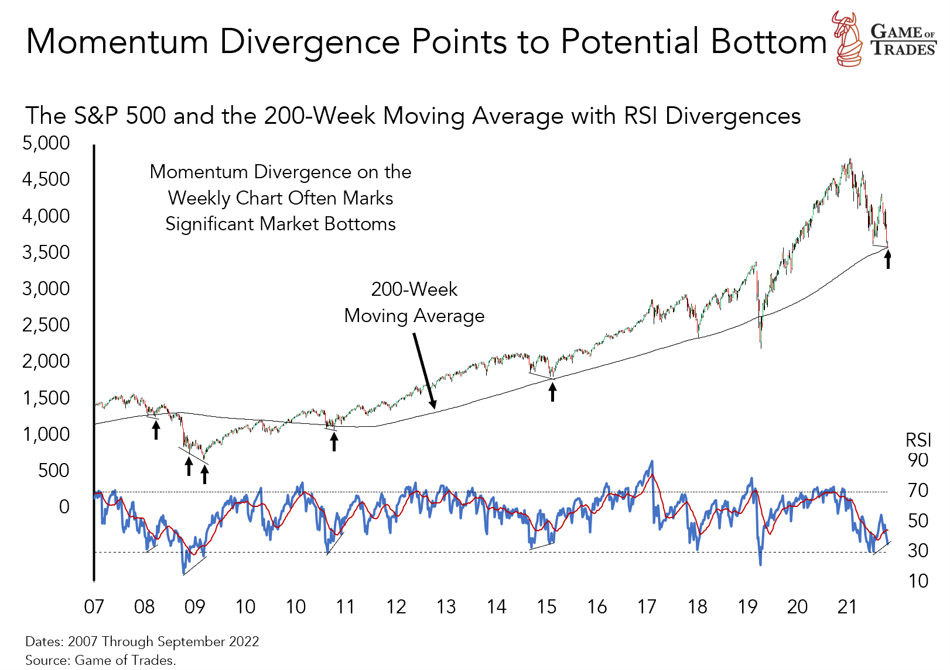 Putting everything together, we think that today’s worries about inflation are already baked in the price. To stay ahead of the game we need to anticipate what tomorrow’s worries will be. As investors think about the effects of the Fed’s aggressive rate hikes, they will likely turn their attention to the strength of the economy (i.e., earnings).

The massive rise in interest rates raises the odds the Fed is making a mistake. Recessions haven’t been too far away when money has been this tight. If the economy weakens, the Fed now has more room to cut rates, a positive for stocks. The more bond yields go down, the more valuation multiples go up. We think that stocks will climb the “wall of worry” as earnings beat expectations. We don’t believe the analysts’ overt pessimism will come true. 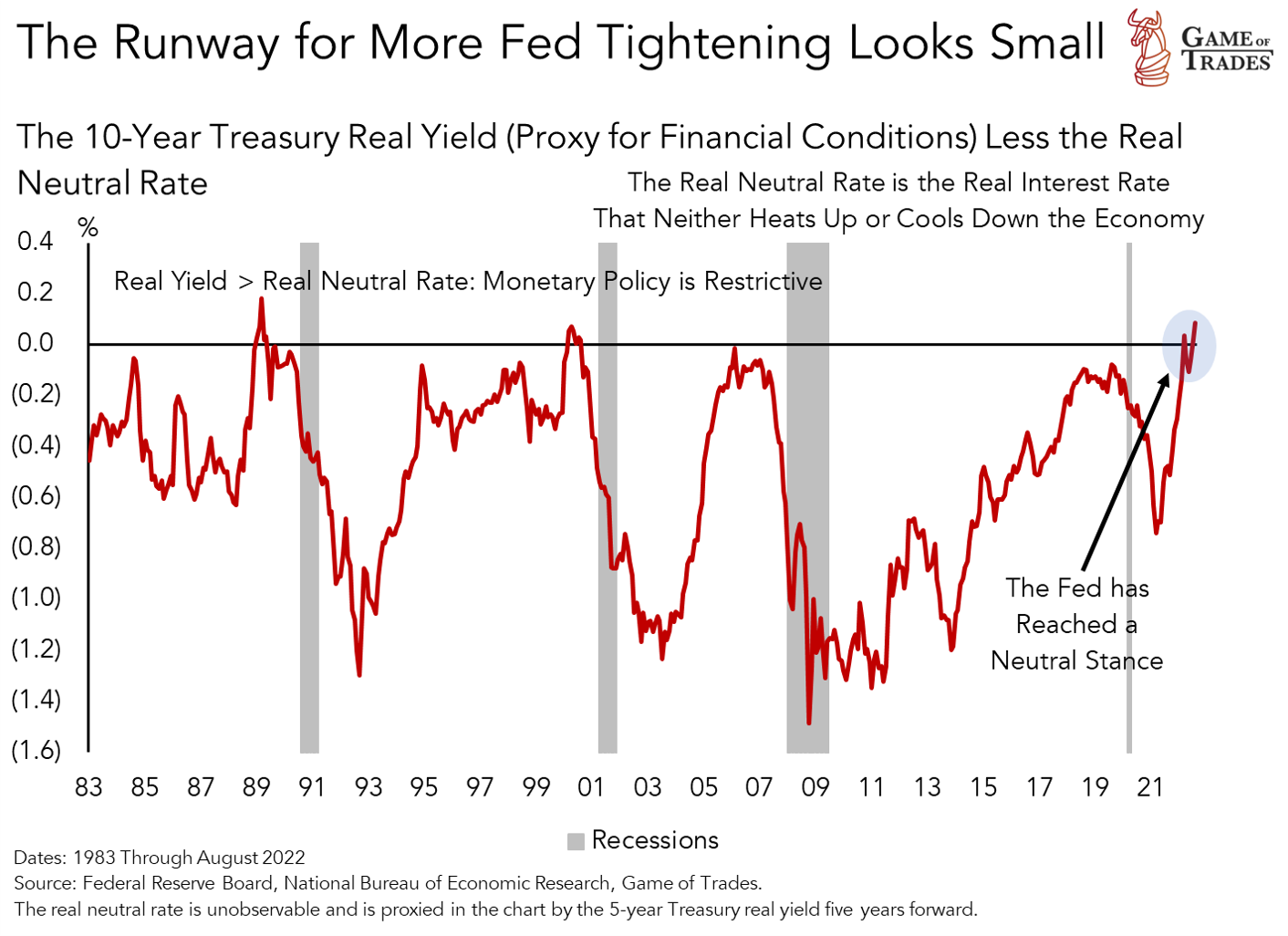 The details that formulate our thesis can be found on our website. It features a lot of articles and videos that come from our strategic and tactical research. The strategic research guides our investment thesis, while our tactical research provides the best entry points to play it.

Our work has led us to develop our Game of Trades Model Portfolio that details how we’re positioning ourselves to benefit from the coming macroeconomic environment. Details around its construction and current allocation are found on our website. Be sure to check it out.

Good luck and see you in Q4.

Get your free trial

Q4 Newsletter – Today’s Fears Won’t Be Tomorrow’s: The Fed and Beyond

Q3 in Review: The Bond Market Knew After the Fed brought pain to stocks in the first few months of the year, investors drew a line in the sand i...
Oct 03, 2022
See more