This post reviews the most impactful headlines from the first half of 2021, the year-to-date asset performance, and on-chain data to get a sense of where we are in the market cycle.

Elon Musk started the year by stating that bitcoin will be added to Tesla’s financial sheet and that bitcoin would be accepted for EV sales. For his involvement in supervising Tesla’s adoption of Bitcoin, he even gave the company’s CFO, Zach Kirkhorn, the secondary title of “Master of Coin.” This rapidly changed when Elon switched direction, dumping 10% of Tesla’s bitcoin holdings and stopping bitcoin-based electric vehicle purchases, citing environmental concerns and the need to test market liquidity.

The next weeks’ news cycles would be dominated by environmental FUD (Fear, Uncertainty, Doubt), with Elon reiterating his concerns and lawmakers such as Elizabeth Warren voicing their displeasure with Bitcoin’s energy usage. The environmental rhetoric against Bitcoin seems to be somewhat unfounded when compared to its alternative (traditional banking system), experts in the field, including the Galaxy Digital team, issued a study comparing Bitcoin’s energy use to that of traditional banking. They discovered that the banking system — which includes bank data centers, bank offices, ATMs, and card networks – utilized more than twice as much energy as Bitcoin.

As more nuanced understandings of Bitcoin’s energy usage became generally understood, environmental worries began to fade. The usage of curtailed energy (energy that would otherwise be wasted) for bitcoin mining was highlighted in particular. The overbuilding of hydroelectric power facilities in the Xinjiang and Sichuan regions explains the abundance of cheap curtailed electricity in China, and provides more insight into why the bulk of hash rate has traditionally resided in the region. A crucial element of Bitcoin’s architecture is that miners are continuously looking for inexpensive electricity.

In June, a new figure, Salvadoran President Nayib Bukele, appeared on the stage. Bukele was successful in getting bitcoin accepted as legal currency in El Salvador. Bukele positioned the “Bitcoin Law” as a way to reduce El Salvador’s dependency on the global banking system, which has made remittances expensive and inefficient. The costs of remittance are believed to be up to 50% of the total transaction. With remittances accounting for 22% of the country’s GDP, this has become a rising problem. Using Bitcoin’s Lightning Network, El Salvador’s cooperation with Strike is intended to cut remittance costs to near zero.

China has “banned” cryptocurrency on many occasions in recent years, but the most recent ban, issued by Vice Premier Liu He, appears to be holding. Bitcoin miners in China have ceased operations and are in the process of moving to more favorable locations. This is supported by the substantial drop in Bitcoin’s hash rate. 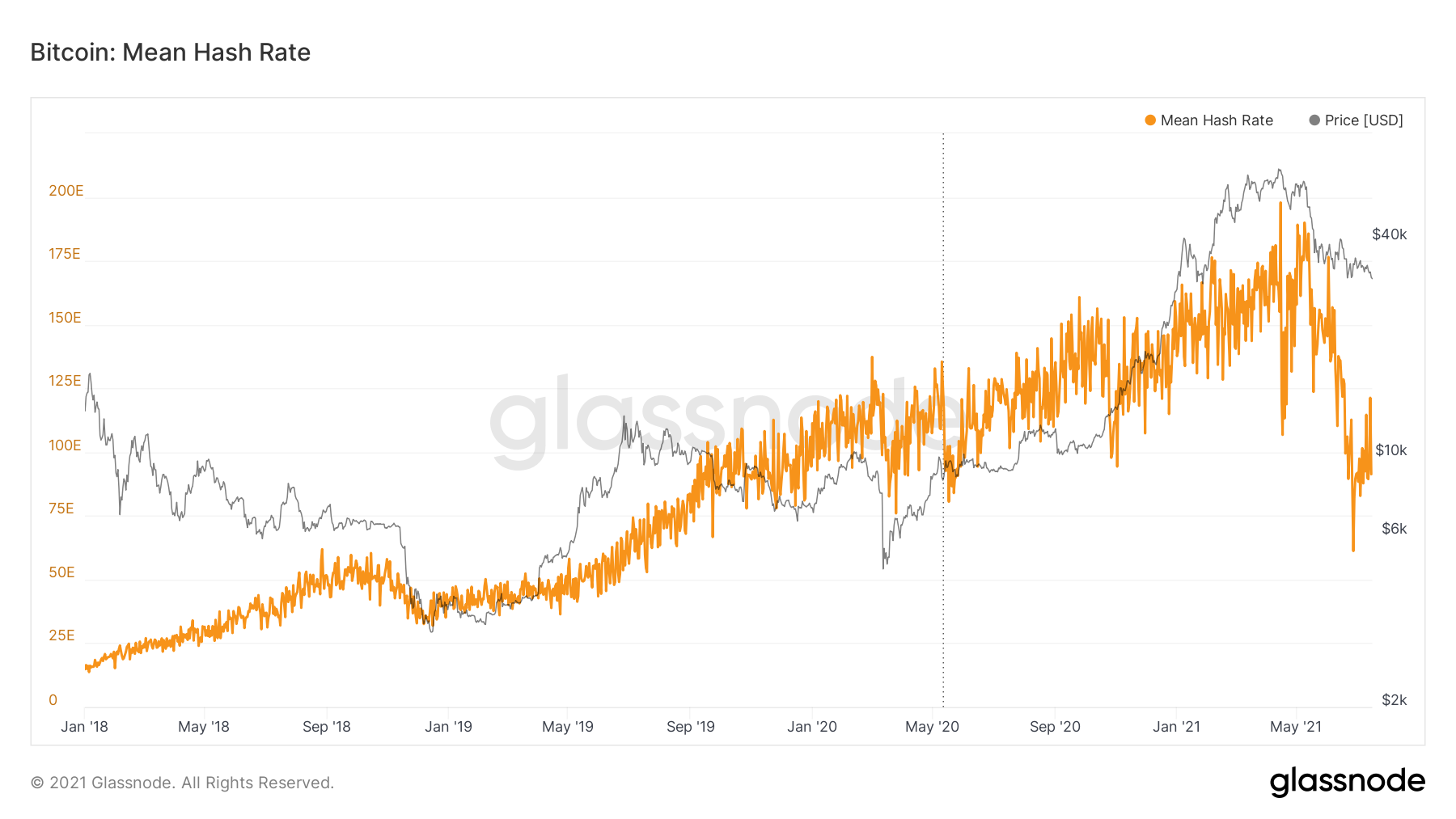 We see the exodus of miners from China as a positive development since it further decentralizes the network and solves the long-standing issue that China “controls bitcoin” — a popular criticism based on the country’s historically significant proportion of bitcoin hash rate.

By the close of the first half of the year, Bitcoin had gained 19 percent, making it one of the top performers among traditional asset classes. Since October 2020, we’ve recommended an overweight position in Ethereum vs. Bitcoin, and it’s outperformed both Bitcoin and traditional asset classes posting a 208% gain. The outperformance of Ethereum in comparison to Bitcoin has fueled a robust alt-season in the first quarter of the year. This is backed up by a 43 percent rise in the Bitwise 10 Crypto Index, which includes large-cap alts like Cardano, Uniswap, Chainlink, and Polygon.

Investors have begun to understand the differences between Ether and bitcoin, and have begun to regard them as independent and distinct assets. While most investors think of bitcoin as a store of value or inflation hedge, Ether is a native currency that receives its value from Ethereum’s network of decentralized apps, or “dApps.”. Over the next few quarters, we expect investors to have a better grasp of this distinction.

On-chain data analysis has shown to be useful in determining where we are in the crypto market cycle.

The Spent Output Profit Ratio (SOPR) is a measure that we find especially useful. SOPR is calculated by taking the realized value and dividing by the value at creation of a spent output. Or simply: price sold / price paid .
When the SOPR is greater than one, it means that the asset’s owners are profiting at the time of the transaction.
Below 1 implies sellers have capitulated and sold at a loss.

A SOPR below 1 in a bull market, as we expect to be in today, might suggest a local bottom since sellers are unwilling to sell at a loss. In a bear market, a SOPR over 1 might spark more selling as investors look for the point where their position is break-even before selling. 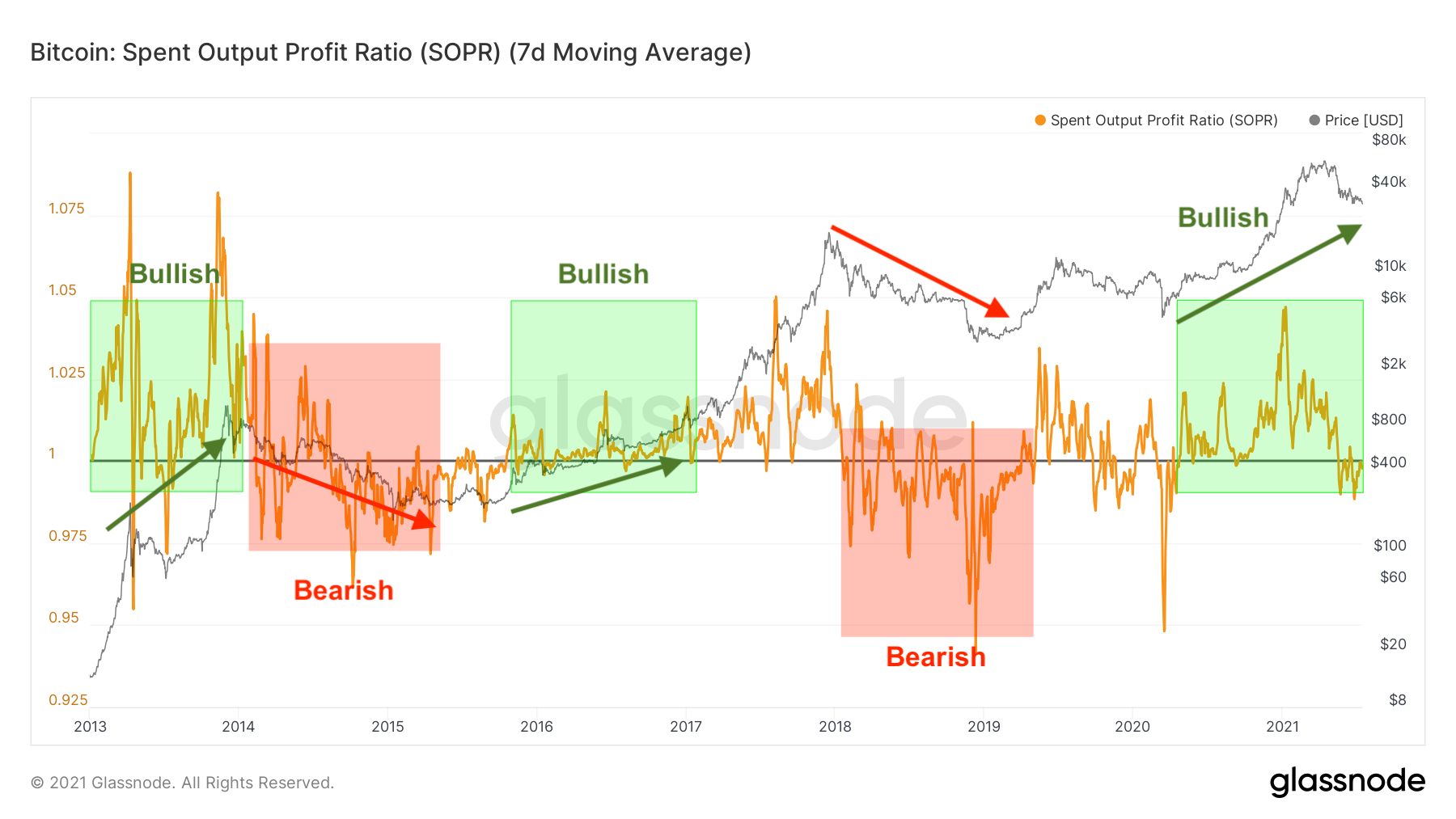 During the recent correction in May, SOPR crossed 1 and has held there since. From our perspective, this is a healthy reset of profit-taking similar to what we saw in March 2020 which was proceeded by higher prices for the remainder of 2020.

The MVRV Z-Score is another tool we use to assess when Bitcoin is over/undervalued relative to its “fair value”. Market value is essentially the Bitcoin market cap, while Realized Value takes the price of each Bitcoin when it was last moved i.e. the last time it was sent from one wallet to another wallet. It then adds up all those individual prices and takes an average of them. It then multiplies that average price by the total number of coins in circulation. In doing so, it strips out the short-term market sentiment that we have within the Market Value metric. It can therefore be seen as a more ‘true’ long-term measure of Bitcoin value which Market Value moves above and below depending on the market sentiment at the time.

When market value is significantly higher than realized value, it has historically indicated a market top (red zone), while the opposite has indicated market bottoms (green zone). 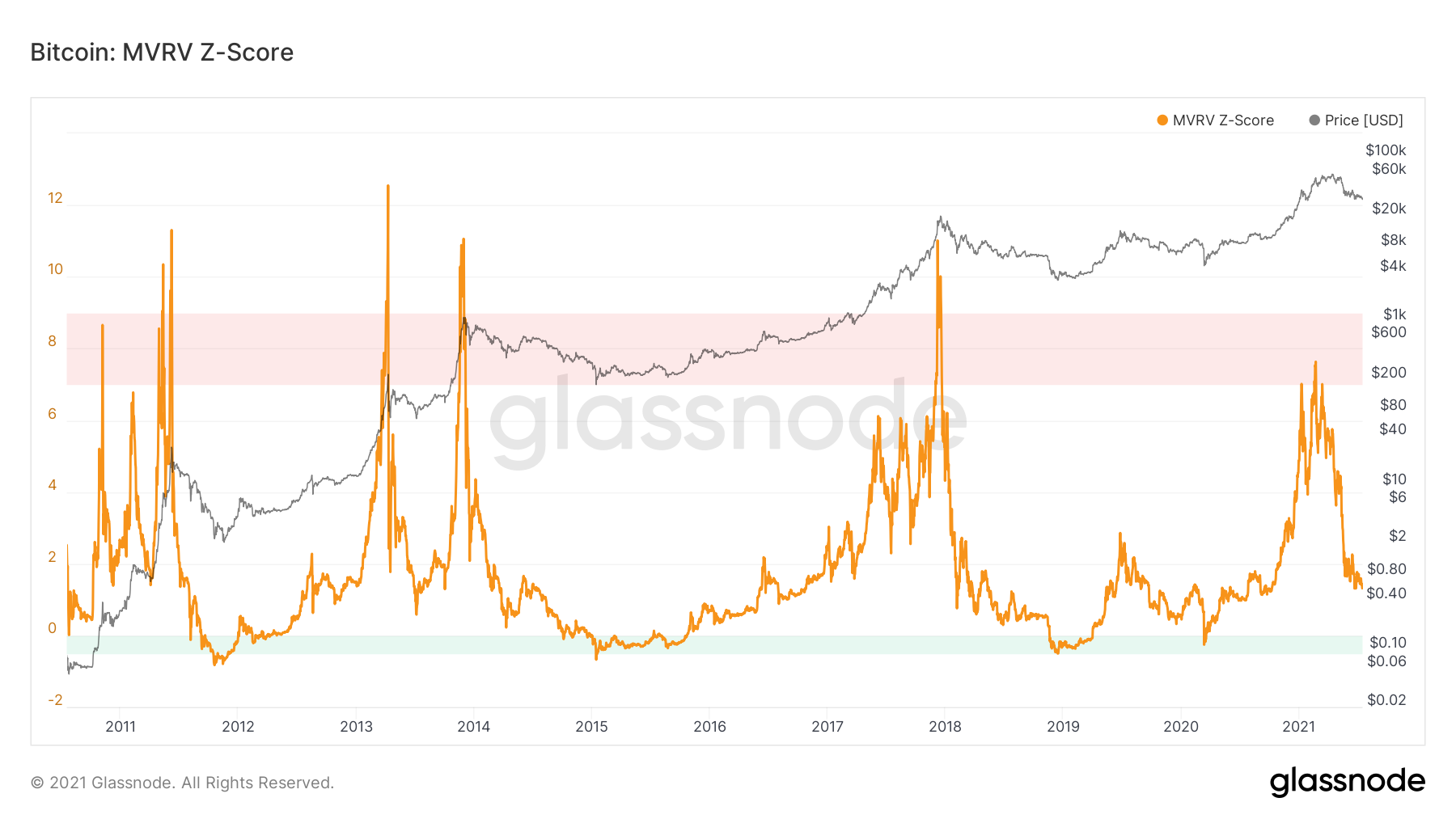 The readings for the current cycle show a double top cycle is a likely scenario as the score briefly peaked in the red zone at the local top and is now consolidating at support. There was no overshoot of the red band, as there was no parabolic price action like all previous BTC tops.

In 2021, stablecoins solidified their position, with a total supply reaching $100 billion. We think the demand for stablecoins is a strong proxy for the demand for digital assets more generally given the ease with which they can be purchased using stablecoins relative to traditional fiat. Capital flight out of more restricted fiats like the Yuan explains the high demand for USD stablecoins.

Stablecoin flows are a good sign of digital asset demand that has been suppressed. The Stablecoin Supply Ratio measures this by comparing the supply of Bitcoin to the supply of stablecoins. A low SSR indicates that there are large amounts of stablecoins on the sidelines – or greater purchasing power to acquire risky digital assets. SSR looks to have reached a low point in May and has been slowly rising since then. 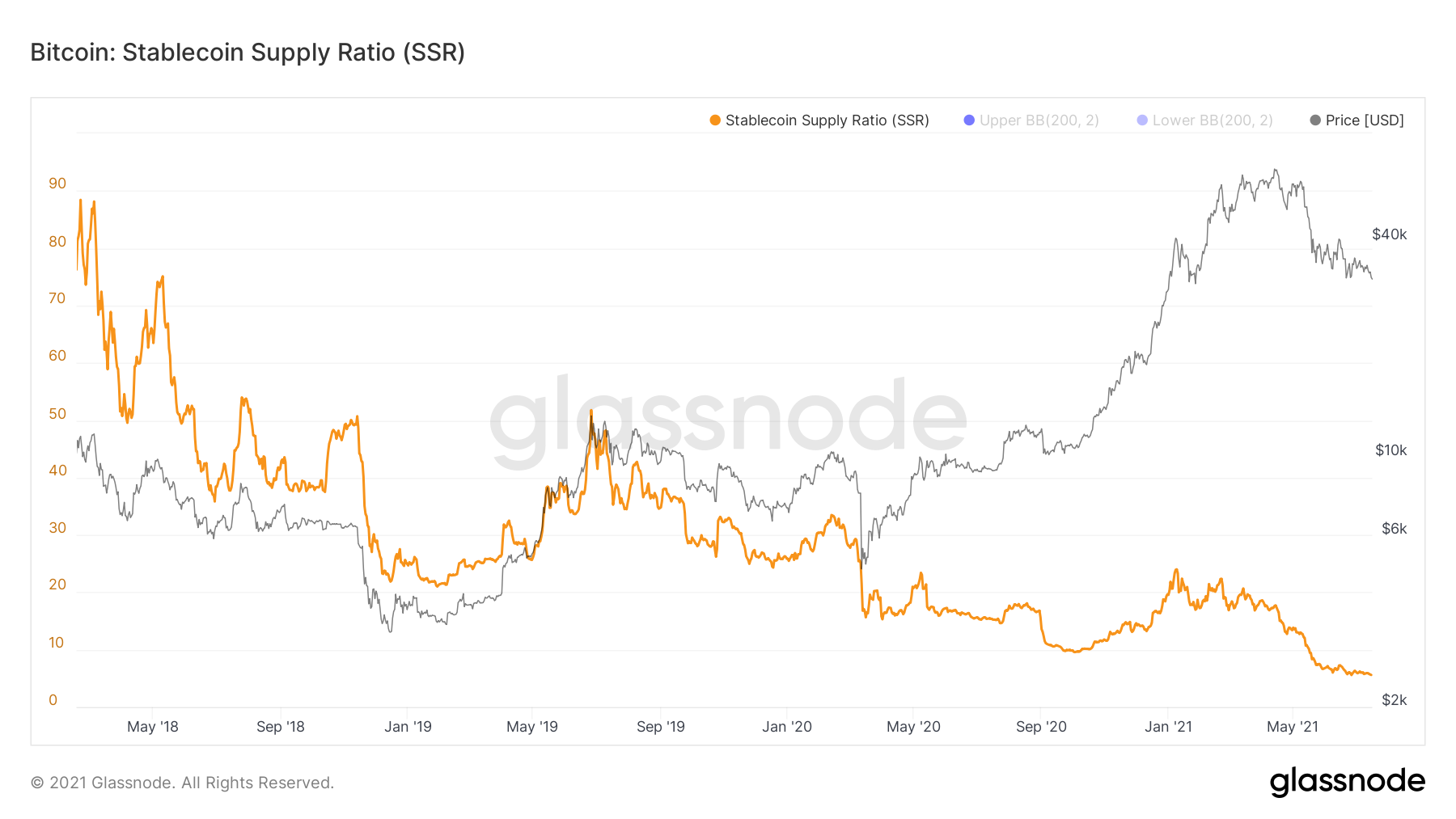 The SSR Oscillator smooths the metric and provides a measure of flow momentum, which had been migrating from BTC to stablecoins but had slowed, bottomed, and begun to shift back.

There is not enough historical data to fully evaluate the SSR ratio’s predictive value, but the SSR oscillator coming out of the green zone (current development) is typically a good buy signal for BTC as momentum migrates back from stablecoins to BTC.

Smaller cap crypto assets tend to outperform during bull market upcycles and underperform during market corrections. Alts had been outperforming during the early part of the year but have cooled off recently. On May 15 we mentioned markets could see a temporary rotation back into Bitcoin, which we’ve since gotten during this sell-off.

Bitcoin has been gaining momentum in terms of crypto market share recently, which is supported by the cross on the MACD weekly BTC.d chart. Bitcoin is likely to gain more market share back during this consolidation before altcoins find their relative bottom vs. BTC and can start outperforming again during the expected second alt-season of the cycle.

From an investor’s standpoint, we see retain two very bullish cases for the digital asset.

On a macro level, we are coming towards the end of a debt cycle and we will either face significant deflation (debt restructuring is deflationary) OR an accelerated monetary debasement (devaluing debt while keeping interest rates low by purchasing bonds =  monetary inflation).

The current environment is extremely deflationary with money velocity at an all-time low similar to the 1920s, however, a period of monetary inflation will likely follow, fueled by a combination of fiscal stimulus and bond purchases. While we are most likely headed towards monetary inflation, a deflationary shock on the way there is very much possible if external factors push to burst the housing or stock market bubble (bubble bursts are extremely deflationary).

This is why gold currently looks very attractive to many investors since it withstands deflation well and shines when there is inflation. Bitcoin fits the same investment case as a store of value or inflation hedge asset as gold as it has the same (and better) properties but a smaller track record with higher volatility (for now).

On a technology level, an investor anticipates tomorrow’s world. Bitcoin’s technology value proposition is the digitalization and dematerialization of property. The dematerialization of value and property is key to the fundamental case, and most people have a difficult time contemplating a future world where a significant share of the population stores personal property on a decentralized, secure, uncensorable code.

Volatility is still the name of the game in Bitcoin but the enormous upside compensates for it (with a Sharpe ratio often higher than 2.5) and those who hold on over the long term will be rewarded as the asset takes ever more market share from other traditional store holds of wealth over time.

Leave a reply Click here to cancel the reply