After finding support around the $28,000 mark, Bitcoin is trading at $40,000 once more. We’re still seeing net outflows of BTC from exchanges, which might result in a supply shortage.

For the first time since the enormous migration of hash rate out of China over two months ago, bitcoin mining difficulty is expected to rise. Mining difficulty, as a reminder, affects how tough it is to mine a block and get BTC rewards. Every two weeks, the network self-adjusts. A rise in difficulty is a strong sign for the mining business, and it’s most likely due to increased North American mining capacity and displaced Chinese workers returning to work in new areas.

Last week was a stressful week for many crypto investors, as Bitcoin’s price challenged the $30k support level, which many thought would be broken and send the price down to the low $20k area. Bitcoin, however, surged for eight days straight after holding the crucial milestone, and is presently just above $40k, testing the upper end of the range it’s been trading in since May. This week has served as a timely reminder of why HODLing is so crucial for crypto investors (investors should focus on the long term bullish case and sit tight through short term volatility)

A wave of short liquidations and a chain of market responses were sparked by a sharp rise in the spot market. 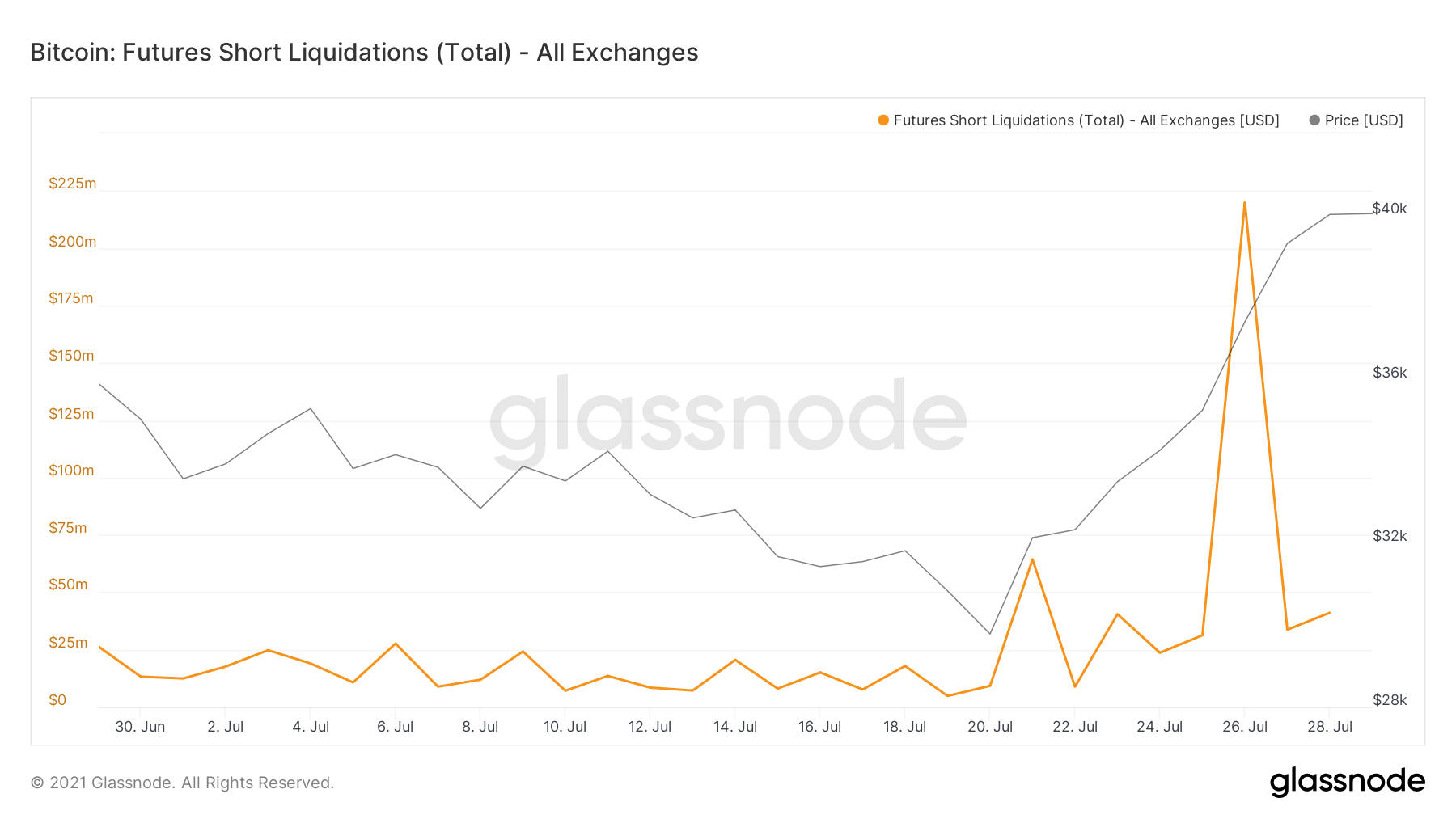 The recent rally in BTC is increasing the odds of a golden cross occurring.

The 50-day MA is beginning to curl back up with the recent powerful move, while the 200 MA will lag for a while following the significant May 2021 correction.

Back in June, we discussed the predictive value of the “death cross” on Bitcoin and concluded that death crosses tend to be lagging indicators. This is due to the nature of Bitcoin’s price action which tends to have rapid and sharp corrections (a death cross will occur after a significant correction has already occurred).

Golden crosses have a similar nature but have a much higher predictive value than death crosses on BTC. Uptrends tend to start slow and build momentum.

If price remains above the 50 day MA, we could see a golden cross occur over the next few weeks.
This would contribute to a strengthening trend on Bitcoin and a confirmation that the bull market is resuming. We recommend not to chase sentiment or focus on this indicator but rather identify good long opportunities while BTC remains within its 30-40k consolidation range.

BTC is unlikely to break out of its consolidation range in one go after nine green daily candles. Consolidation with a higher low at the top of the current range before resuming its rally is a more probable scenario. It would give a great last accumulation opportunity at the same time.

There is currently divergence building on the 4H chart on this last leg up, indicating the short term trend is losing momentum whilst price is approaching a significant area of resistance (price channel resistance and the 100 day MA)

Although, divergences can be burned through especially in crypto markets, this does increase the odds of a short term pull back which could provide a long opportunities at significant areas of support (highlighted on the chart below).

While recent developments on BTC are very encouraging, short-term technicals are still in a bearish territory as long as the price stays under the 100 day MA and the significant downtrend resistance.

The strong momentum on the dominance shows no signs of slowing as the asset continues to gain market share back from altcoins. Historically, dominance has grown during mid-cycle consolidation periods and downturn markets. With BTC dominance still growing while total market value continues to rise, this sell-off is another sign pointing towards a current mid-cycle rotation rather than a full-fledged bear market.

The amount of transactions and on-chain activity are both calm. The entity-adjusted transaction volume for Bitcoin is about $5 billion per day on a 14-day Median basis. This is still a considerable drop from the $16 billion per day seen before the May sell-off.

However, the volume has not yet dropped to the same amount as it did after the 2017 blow-off peak when it witnessed a full retrace, a following bear market, and finally, a long capitulation. The strong momentum on the dominance shows no signs of slowing as the asset continues to gain market share back from altcoins. 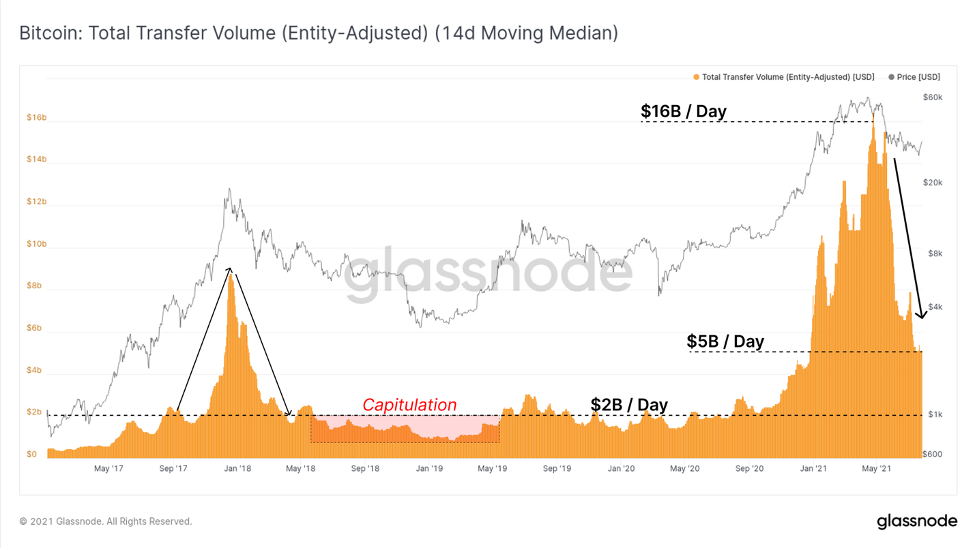 The EA-NVT showed that the Bitcoin network was comparatively oversold to on-chain settlement volumes when prices dropped to $29k. The EA-NVT has now risen as a result of the short squeeze.
On-chain volumes now have to increase to sustain these elevated prices; otherwise, it might indicate that the rally lacks fundamental network drivers.

China’s tech crackdown might be a more significant contributor than most people realize. Many investors may be willing to think that the recent move was simply structural and speculative, owing to the short squeeze and the debunked Amazon story.
Bitcoin and Chinese equities have typically trended in the same direction but have recently diverged significantly. This risk-off in Chinese stocks might be seen as a sign that BTC is about to reconverge lower, but these aren’t regular times for Chinese equity markets. The CCP is taking a significant step backward in its approach to capitalism, which has alarmed many foreign investors who have money in the nation.

Historically, laws limiting financial liberty have had a strong track record in boosting Bitcoin’s total market cap. In Cyprus, 2013, the nation essentially confiscated about half of the country’s bank deposits. That move from the little island was a crucial element in sparking the massive bull run in cryptocurrency, which was considerably smaller at the time, that took place in 2013 when the price rose to north of $1,000.
This sort of event is not unique to Cyprus. It happened before the 2017 bull market too, when India demonetized large banknotes in 2016, which contributed to the subsequent crypto rise.
The full implementation of the Chinese CBDC soon might be a significant positive stimulus for cryptocurrencies, a stimulus delivered by the world’s second-largest economy.
If the CCP’s more hostile stance toward outside investors and its tech elites continues or intensifies, we believe it will catalyze cryptocurrency.
We could anticipate a situation similar to what occurred in Cyprus in 2013 if the rich in China grow afraid that their property rights may be jeopardized.

Leave a reply Click here to cancel the reply